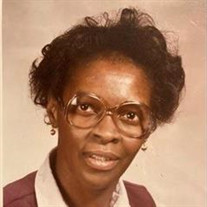 When Ada Mae entered the world on April 15, 1942; she would lead a life of service and care towards children. Born in Wetumpka, Alabama, her family moved to Chicago when she was a young girl and settled on the Southside. It was there she would meet and marry the love of her life, Isaiah Holt Sr. Ada and Isaiah’s lives increased from 2 to 7 as they gave birth to and raised 5 children (Alison, Isaiah Jr. Leander, LaDora, and Lanier). Moving from Row Houses to the Projects in Chicago, the family finally settled down in East Chicago Heights, IL (now Ford Heights). After the birth of her youngest child, Ada began to volunteer for CEDA Headstart/Daycare and it was here she found her niche. She proceeded to achieve her BA in Early Childhood Education and rose through the ranks from Volunteer to Teacher to Director in both the Ford Heights and Harvey, IL locations. Ada would always attend church as a young girl but it was in her adult life that she committed herself to The Lord and joined Christian Valley M.B. Church in Ford Heights where Rev. O. D. Bady Sr. was and Rev. Wyatt Rush is the Pastor. Ada was an Usher and took her responsibility seriously; always dressed in the proper uniform from badge and neckpiece to the traditional short, white gloves. She loved her church and her church family. On a cold January night Ada had a conversation with God. She’d buried her husband and a son among other family members. She’d see her youngest son achieve tenure as a professor, the middle daughter succeed in business, youngest daughter become her “ride-or-die” and the eldest take up the mantle of teaching children. In her husband she’d had that one, great love. It was enough now. On January 29, 2021, Ada slipped the surly bonds of earth to touch the face of God. Words cannot express how much she has already been missed. Yet, Ada Mae Holt has gone “where the wicked shall cease from troubling, the weary shall be at rest; and all the saints and the angels, shall sit at His feet and be blessed.” Ada was preceded in passing by her mother Rosie Lee Ricks, sister Candy Scott, brother Henry Lee Ricks, husband Isaiah Holt Sr, and son Isaiah Holt Jr. She leaves to cherish her memory her children Alison Holt, Leander Jackson (Steve), LaDora Holt, and Lanier Holt (Rachael); sister Dr. Rosemary Ricks-Saulsby; brother Oscar Ricks Jr.; grandchildren Danielle Lynnette Jackson, Ruby Holt and Naomi Holt; and a host of extended family and friends.

When Ada Mae entered the world on April 15, 1942; she would lead a life of service and care towards children. Born in Wetumpka, Alabama, her family moved to Chicago when she was a young girl and settled on the Southside. It was there she would... View Obituary & Service Information

The family of Ada Mae Holt created this Life Tributes page to make it easy to share your memories.

Send flowers to the Holt family.