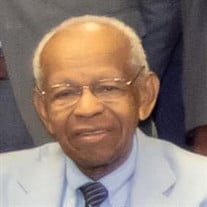 Brother Albert Johnson was born in Belcher, Louisiana, February 16, 1933, to Ford and Eleasie Johnson. He was the fifth of ten children. Later, the family moved to Boosier City, Louisiana, where Albert spent his school years in the Bossier City... View Obituary & Service Information

The family of Mr. Albert Johnson created this Life Tributes page to make it easy to share your memories.