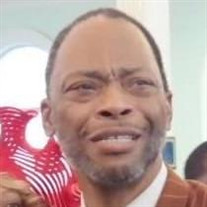 Albert Wallace Morrison Jr. was born October 6th, 1955 in Lexington, Kentucky to the union of Albert Wallace Morrison Sr. and Naomi Elizabeth Faulkner Morrison. Albert Jr. was the first born of nine children, seven from this union and two more from the union of Albert Sr. and Jean Bruer Morrison who married in 1964. Albert Jr., better known as Al, moved with his family to Chicago, Illinois where he attended Parker, Ludwig Van Beethoven, Overton Elementary schools and DuSable High School. He received additional vocational training at Job Corps which prepared him for work as a carpenter and painter in the local union. He also worked as an independently contracted skilled worker. As a youth, Al was very athletically and artistically gifted. Growing up in church under the tutelage of his father and pastor, Al explored his musical talents which he would actively engage for the rest of his life. He learned to play drums and would eventually master the electric bass guitar. He also sang bass in the Gospel quartet The Morrison Echoes with his brothers and family friends. As both singer and instrumentalist, Al shared his music nationally and locally in Chicago at various churches and venues including the local Gospel television music show, Saturday Night Sing and at the Harris Theatre for Music and Dance where he performed with his children in 2019. Al was also passionately committed to other theological ecclesiastical endeavors as a lay preacher and teacher in the local churches he attended. Most recently, he served as Elder at New Mercy House of God, in Harvey, IL, alongside longtime friend and Pastor Evangelist Gwendolyn Williams. From his union with Kira Williams Morrison, Al became father of two children, Albert W. Morrison III and Whitney Ayana Morrison and stepfather to Lauren Elizabeth Williams. Al was very godly proud of his children. On May 29th, 2020, Al exchanged time for eternity. He was preceded in death by his parents, Albert Sr. and Naomi; his stepmother Jean; and his sisters Uwanna and Eunicetine Morrison. He was also preceded in death by his grandparents Harry and Ernestine Blue, with whom he had an especially close relationship. Al leaves to cherish his memory his children Albert Morrison III, Whitney Morrison and Lauren Williams; five brothers David, Stephen, Raphael, Gershom (Renee), and Anthony (Kelly); one sister Desiree Morrison Alexander (Dorian); and a host of nieces, nephews, cousins, other relatives and friends.

The family of Albert Wallace Morrison Jr. created this Life Tributes page to make it easy to share your memories.

Send flowers to the Morrison family.