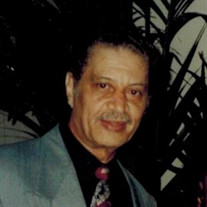 Alexander Finner was born September 18, 1925 in Sheffield, Alabama to Alex James Finner and Flora Webster. Alexander’s family moved to Chicago, Illinois when he was a young boy to make a better life for the family. He was an excellent student who aspired to become a chemical engineer. He excelled in and graduated from Dunbar High School as valedictorian. Alexander was joined in holy matrimony with Dannette Miller, that union was blessed with three children Alexander III, Phyllis and Denise. He also had another daughter Jill. Alexander’s ambition led to his first job as a young man he was a Telegraph Carrier where he delivered mail on a bicycle. He worked as a Cook for Union Pacific Railroad, and at Pioneer Construction Company for 45 years as a Construction Site Supervisor, until his retirement. Alexander enjoyed life to the fullest. His favorite activity was spending time with his family telling stories of his life and inspiring family to reach lofty goals. He enjoyed traveling the world and exploring new places. Mr. Finner had a sharp mind and was still active at the age of 93, with the help of his loving daughter and care giver Denise Ross. Denise loved caring for her dad. She felt it was her honor and privilege to make sure he had the best care possible. At 93 years of age, on Thursday, December 20, 2018, Alexander Finner made his transition. He was preceded in death by his parents Alex and Flora, and one daughter Phyllis. Alexander leaves to cherish his memory, his children Alexander Jr., Denise, and Jill; grandchildren Wayne, Shauton, Verdell, John, Octavis, Habari, Dannette, Leo, Janell, and Thomas; and a host great grandchildren, nieces, nephews, other friends and family too numerous to mention.

Alexander Finner was born September 18, 1925 in Sheffield, Alabama to Alex James Finner and Flora Webster. Alexander&#8217;s family moved to Chicago, Illinois when he was a young boy to make a better life for the family. He was an excellent... View Obituary & Service Information

The family of Alexander Finner created this Life Tributes page to make it easy to share your memories.

Send flowers to the Finner family.