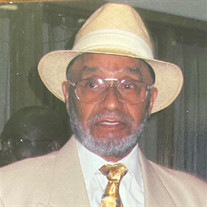 Allison Dunn Jr. was born to the union of Allison Dunn Sr. and Maude Ruth Dunn on July 2, 1935 in Evanston, Illinois. Allison began his work history at the early age of 12 years old as a newspaper boy; a job in which he was excited to have. He later would go on to work in numerous fields throughout his life. One of his dreams was to become an entrepreneur which was realized when he owned and operated Clark gas station. In addition to that, he worked as a driver with Bell Fuel Company and Prairie Material Cement Company after receiving his Commercial Driving License (CDL). After a long and productive work history, he would later retire from Prairie Material Cement Company in the year 2003. Allison was a hard working man, but he was also other things, to name a few; he was humble with a calm spirit. Allison met Verna in 1992, they would later go on to live a beautiful married life. If you knew Allison you would know that he was a gentleman with a charismatic personality. His smile and laughter would light up a room. He was famous for his wit always ready to make a joke. Allison enjoyed playing cards, fishing, bowling, traveling, and working on cars. He loved maintaining the yard. Allison was a master at barbecuing and cooking. One of his most requested dishes was his lasagna, due to him adding his own unique flavors. Allison was a collector of music, but his preference was Jazz and Rhythm and Blues. One of his favorite pastimes was watching the Cubs and wrestling. Allison enjoyed many things, but what he treasured the most was family and we treasured him. On October 1, 2020, Allison Dunn Jr. fell asleep in death. He was preceded in death by his parents Allison Dunn Sr. and Maude Dunn; two sisters Ruth Chapman and Dorothy Askew “Dott”; and one brother Edmond Dunn. Allison Dunn Jr. leaves to cherish his memories, a loving and devoted wife Verna Dunn; seven loving children Allison Dunn, Gloria Dunn Huffman “Dee Dee”, Edward Dunn “Rusty”, Gregory Dunn “Hollywood”, Cynthia Dunn “Cindy”, Cordell Dunn, and Victor Dunn and their spouses; two step children Katrina Profit “Trina” and Frank Ray; several grandchildren, special mentions Elicia Waters (his first granddaughter), Dashawn Smith (his first grandson), Jeremy Dunn (his grandson), and Heipasia Hicks (his step granddaughter); great grandchildren, great-great grandchildren, and a host of nieces, nephews, relatives and friends.

Allison Dunn Jr. was born to the union of Allison Dunn Sr. and Maude Ruth Dunn on July 2, 1935 in Evanston, Illinois. Allison began his work history at the early age of 12 years old as a newspaper boy; a job in which he was excited to have.... View Obituary & Service Information

The family of Allison Dunn Jr. created this Life Tributes page to make it easy to share your memories.

Send flowers to the Dunn family.