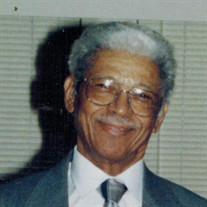 Alonzo W. Williams Jr. was born on January 23, 1927 in Hopkinsville, Kentucky. He was raised by his grandfather, Bracie Dugid. After finishing high school, Alonzo came to Chicago, Illinois where he landed a job at Consolidate Distilled Products. In 1950, Alonzo married Annie Foster. They shared a union of 66 years, until his death. The story with them is kind of like a love at first sight. He didn’t even know her name, he took one look at her and said out loud…”I’m going to marry that girl”...and he did. Once, when asked how did he stay married for so long? He replied, “The wife is always right”. From this union came a son, Alonzo WIlliams III; a daughter-in-law, Selena M. Williams and two granddaughters, Elizabeth and Rebecca Williams. After a study of God’s word the Bible, Alonzo dedicated his life to Jehovah and symbolized his dedication through water baptism in 1940, becoming one of Jehovah’s Witnesses. He cherished his privilege of service as an elder. He enjoyed his many privileges of service to the congregation like pioneering, assisting with the needs of the local congregation, accounting and keeping the books in order at all the conventions and assemblies as well as serving the friends. Alonzo had a love for taking anything apart for any reason, even when it wasn’t broken. You could always count on him and his trusty tool, duck tape. He was very old school. He loved watching westerns, especially westerns with John Wayne. He could tell what year a movie was made, who was in it and even who the director was. He always shared stories about his childhood and what it was like growing up with his grandfather and how they used to sell ice blocks. Alonzo enjoyed road trips and being in the backyard. If you were coming down Wentworth, during the spring or summer, you were sure to see him and Annie in the backyard until dawn. There’s a story with him and photography and we will let him tell that story in paradise. On December 23, 2017, Alonzo W. Williams Jr. fell sleep in death. He now awaits the promise at Job 14:13-15. Alonzo leaves to cherish his memories, his wife, Annie Williams; his son, Alonzo Williams III; his daughter-in-law, Selena Williams; his two granddaughters, Elizabeth and Rebecca Williams; and a host of nieces, nephews, cousins, spiritual sons and daughters and very dear friends.

Alonzo W. Williams Jr. was born on January 23, 1927 in Hopkinsville, Kentucky. He was raised by his grandfather, Bracie Dugid. After finishing high school, Alonzo came to Chicago, Illinois where he landed a job at Consolidate Distilled Products. In... View Obituary & Service Information

The family of Alonzo W. Williams Jr. created this Life Tributes page to make it easy to share your memories.