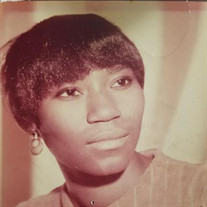 Amanda Thurmond was born on April 2, 1946, in Shellmound, Mississippi. She was the youngest girl born to the union of Peter and Mattie Stanley. Her father nicknamed her “Candy”. The family remained in Greenwood, Mississippi until 1959, at which time the majority of the family then moved to Chicago, Illinois. She attended Farragut Career Academy and graduated in 1965. Amanda started working at the U.S. Postal Service in Chicago, Illinois in 1968. She started her career there as a LSM Clerk during the night shift and after 12 years decided to change positions and become a Postal Carrier. Amanda was joined in marriage in 1970 to Noah Thurmond whom she was married to for 30 wonderful years. From this union they were blessed with two children, Guy Dexter and Misty Althea. On August 26, 2000, her husband fell asleep in death. Amanda was a faithful, loving wife who was also a faithful servant of Jehovah. In June of 1974, Amanda symbolized her dedication to Jehovah by water baptism along with her mother-in-law, two of her brothers-in-law and one sister-in-law what a joyous occasion that had to be! Amanda enjoyed talking to others about her faith and didn’t miss an opportunity to tell others about Jehovah and his hope for mankind. Her favorite topics of conversation were the resurrection hope and the beautiful paradise Jehovah has promised us. She had many favorite kingdom melodies, but her two all-time favorites were “Preach the Word” (song 67) and “Life Without End At Last” (song 140). Amanda is lovingly known for her selfless acts of kindness towards her family and friends. She had a strong bond with her siblings and extended family. She continuously cared for and supported her family in many unselfish ways. Her love for her nephews and nieces was always evident and she had a special relationship with her two granddaughters whom she was able to nurture and teach about Jehovah from a young age. She especially liked reading the “Book of Bible Stories” to them. On Tuesday September 18, 2018, while with her dear daughter and sister, Amanda fell asleep in death. She was proceeded in death by her parents, Peter and Mattie Stanley; her husband of 30 years, Noah Thurmond; siblings, Elijah Stanley, Peter Stanley Jr., Bennie Stanley, Harry Stanley, Tommie Stanley, Rose Williams and Margaret Worthy. Amanda leaves to cherish her loving memories: son, Guy Thurmond; daughter, Misty Andrews (Arvin); two granddaughters, Maia Boyd and Lela Ellis; four brothers, Booker T. Stanley, Sammie Stanley, Richard Stanley, Elichard Stanley, and John Stanley; sister, Sarah Freeman; and a host of nieces, nephews, cousins and friends.

Amanda Thurmond was born on April 2, 1946, in Shellmound, Mississippi. She was the youngest girl born to the union of Peter and Mattie Stanley. Her father nicknamed her &#8220;Candy&#8221;. The family remained in Greenwood, Mississippi until... View Obituary & Service Information

The family of Amanda Thurmond created this Life Tributes page to make it easy to share your memories.

Send flowers to the Thurmond family.