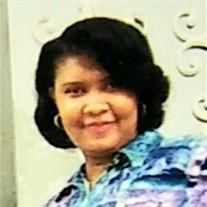 Anastasia “Stacie” Michaela Floyd was born on June 1, 1968 in Chicago, Illinois to the proud parents Eugene (Gene) McWright and Joyce Floyd. She was raised by her grandmother Merry ”Nana” Young-Floyd on Chicago’s Southside. Merry loved and raised Stacie as her own. Stacie continued to live with Merry into her adulthood until Merry’s untimely death in 2003. Stacie begin her journey to Christ at a young age attending various worship services with her grandmother. She continued her journey by studying the Bible intensely, praying consistently, and being committed to helping others know Christ on a personal level. Stacie assisted others in their spiritual growth by sending out scriptures, having prayer time over the phone, and at times meeting them in person. As of recent, Stacie would make it a matter of importance to send out a daily text to her family and friends every morning. Anastasia attended Harold Washington College where she studied Business Administration. During her tenure at Harold Washington College, she met her dear and close friend Belinda ”Ms. Paige” Brewer. Stacie excelled in several administrative positions in prominent corporations in downtown Chicago. Stacie was recently employed by Help at Home, LLC where she served as a caretaker to seniors. Many of them became very close to her and considered her an extended family member. As a native of Chicago, she had many local interests in her city such as exploring the vibrant downtown culture, attending a variety of theaters events, visiting unique restaurants, and spending peaceful time at the Lakefront. These interests were mutually shared by her best friend, Keshia Matthews and her Godmother, Freda Campbell. They enjoyed outings together on a regular basis. Stacie also had a passion and sincere love for the care and welfare of animals. Her home would often be the home to cats, dogs, and birds she would rescue. Her grandmother and neighbors would often rely upon Stacie to feed and love up their four-legged family members as well. Anastasia entered eternal rest on February 23, 2020 after a devout journey to remain a faithful follower of Christ. Stacie was preceded in death by her mother Joyce Floyd-Thomas, grandmother, and grandfather Jerry and Merry Lee Floyd. She lived a full life and leaves behind decades of cherished family memories to, sister, Kelli B. Thomas; brother, Jakarri Thomas; brothers, Kenneth A. Thomas (Teouna); Kristopher M. Thomas; two aunts, Brenda L. Williams (Clayton) and Jerrylyne McGlothen; one uncle, Ralph D. Floyd; and a host of nephews, nieces, cousins, and friends whom she loved dearly. Stacie, we are heartbroken and left with a huge void in our family. We know that this was God’s predestined plan. It was time for you to rest and receive your well-earned heavenly reward. We are thankful for the time God granted you to be with us. Many memories have been created and what a lasting impression you left us. You lived the life of a good Christian soldier wise to the ways of the enemy! Rest easy until we see you again in the presence of God. Jesus said to her, "I am the resurrection and the life. The one who believes in me will live, even though they die; John 11:25

The family of Anastasia Michaela Floyd created this Life Tributes page to make it easy to share your memories.

Send flowers to the Floyd family.