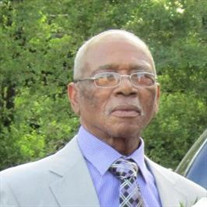 Affectionately known as “Jr., Dad, Daddy, Granddad, Grandpa, Hardy, and Hard Rock” was born on October 12, 1938 in Thomasville, Georgia to the late Anderson and Pearl Hardy. He was the eleventh of twelve children and preceding him in death were four of his brothers and four of his sisters. At a young age, Jr. left Thomasville, GA for Florida to live with his brother Elmer and his family. Soon thereafter, he traded seashells and sunny Florida for the “Windy City” Chicago, IL where his sister Mamie cared for him until he joined the United States Armed Forces and trained as a Paratrooper. He received an honorable discharge. After leaving the military he came back to Chicago where he met and married Annie B. who preceded him in death. To that union three children were born, Felecia, Darryl a.k.a “DR” and Trenda. He worked various jobs until he could find that one job to support his family. He eventually landed a career with the Chicago Transit Authority (CTA) where he became affectionately known as “Hard Rock” due to his tough personality. Later in life Hardy married Denise and to that union two sons were born, Anderson III a.k.a “Andy” and Solomon. Hard Rock retired from the CTA after serving 28 years. After retirement (no such thing for Dad) he went on to transport his fellow Veterans to and from their doctors’ appointments. Dad was a provider and protector till the end. Dad loved to laugh, had a great sense of humor, and was a comic in his own right. His favorite foods were black-eyed peas with cornbread, smothered liver, and Mamie’s sweet potato pie. He could cook a mean pot roast and BBQ the hoofs off a pig. He enjoyed playing Bid Whist until the wee hours of the night if tables were hot. If you played Chess with him, look out! He also enjoyed a good boxing match and could cast a fishing line. He leaves to cherish his loving memories, wife Denise; sons Darryl (Robin), Andy, and Solomon; daughters Felecia (Ricky) and Trenda; sisters Mamie, Angeline, and Almeta; grandchildren Ashley (Anthony), Raphael, Paton, Kayla, Lauryn, and Jaida; great grandchildren Aris, Armon, and Ashton; his favorite niece Maggie, brother-in-law Edwin; sisters-in-law Yolanda and Gerri; and a host of nieces, nephews, cousins, other relatives, and friends.

Affectionately known as &#8220;Jr., Dad, Daddy, Granddad, Grandpa, Hardy, and Hard Rock&#8221; was born on October 12, 1938 in Thomasville, Georgia to the late Anderson and Pearl Hardy. He was the eleventh of twelve children and preceding him... View Obituary & Service Information

The family of Anderson Hardy Jr. created this Life Tributes page to make it easy to share your memories.

Send flowers to the Hardy family.