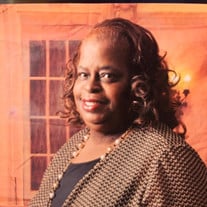 Annie Mae Cole was born on May 29, 1946 in Chicago, Illinois. As a newborn baby girl, she was immediately placed in Mr. and Mrs. Nathaniel Blake’s home in Ford Heights, IL. She lived with the Blakes until she was twelve years old. She accepted the Lord Jesus Christ as a personal savior at an early age with First Church –Church of God in Christ in Chicago Heights, IL. At twelve, Annie and her sister Carol Bogan joined the family of Mr. and Mrs. Matthew James where she gained four more sisters, Joanne, Marsha, Theta and Elouise. At eighteen, she gained yet another family with Deacon and Sis. Mack McGhee, where she acquired three additional siblings: Sandra, Patricia, and Mack McGhee III. During high school, she met Frank C. Cole and on June 12, 1966, they married. To this union four girls were born, Michele, Monica, Marcia and Melissa Cole. Frank and Annie were married 46 years and worked in unity to ensure their girls knew the Lord. While married and raising children, Annie attended Prairie State College and Governors State University and gained her Bachelor of Arts in Urban Business Teacher Education. Mrs. Cole spent 30 years as an educator from 1973-1993 at Prairie State, Bloom, Thorton and Crete-Monee High School. As an educator, she served as the sponsor for the African American Club and poured into the life of many youth and gave them tremendous opportunities of life exposures outside of the school walls. Sis. Cole also led the Junior Usher Board and supported the youth with events and outings. She gave her heart and soul to the young people, embracing them and teaching them the importance of being a doorkeeper in the house of the Lord. Mama Cole touched young people throughout the decades, she truly was a woman who would give her very being to encourage and support the youth. Annie, served the Lord her whole life. She labored in love for over 50 years at Peace and Goodwill Church of God in Christ under the leadership of the late Pastor Samuel Russell and Supt. Fisher Cook. During her time in the church, she served as a church secretary, usher board member and president. Sis. Cole sphere-headed numerous anniversaries, fundraisers and celebrations for the church, leaders and members. After she retired from school and church leadership, she continued running her race to the fullest, caring for her Late Pastor and First Lady Russell in their later years. In the midst of all this work outside the home, Sis. Cole was entrusted by the Lord to care for her invalid daughter day and night for 39 years within the home. Annie’s life was not for the faint of heart, she was a warrior for Christ and an amazing Woman of God. Her race was finished, after meeting her last grandchild and she was called home to glory on November 29, 2020. She leaves to mourn her memory, two daughters: Monica Cole-Jackson (Valon) of Chicago Heights, IL and Marcia Cole-Fijabi (Adebayo) of Beaumont, CA; four sisters: Carol Bogan, Marsha Carr, Sandra Thompson, and Patricia Dixon; one brother: Mack McGhee III; eleven grandchildren: Salahuddin Memon, Saifullah Memon, Surraiya Memon, Altraze Anderson Jr., Amani Anderson, Breanna Jackson, Cole Jackson, Akeria Fijabi, Jabbar Fijabi, Arele Thompson and Valon Jackson Jr.; one great-grandson: Richard Johnson; one Godson: Dranoel Southall; one Goddaughter: Jasmine Williams. She also leaves true supporters to remember her spirit, Betty Cole, Bea Flatt, Clifton Cole, Leonard Cole and Paulette Thomas; and a host of nieces, nephews. friends, neighbors and church family.

Annie Mae Cole was born on May 29, 1946 in Chicago, Illinois. As a newborn baby girl, she was immediately placed in Mr. and Mrs. Nathaniel Blake&#8217;s home in Ford Heights, IL. She lived with the Blakes until she was twelve years old. She... View Obituary & Service Information

The family of Annie Mae Cole created this Life Tributes page to make it easy to share your memories.

Send flowers to the Cole family.