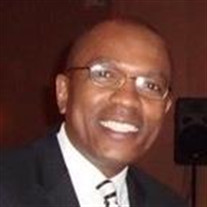 Archer C McGhee was born on May 29, 1959 in Chicago, Illinois to Mr. and Mrs. Willie and Dorothy McGhee. Archer graduated from Carver High School in 1977, and received his Bachelor’s Degree from DePaul University in 1984. He was an avid learner, fluent Spanish speaker, and relished engaging with people. Archer enjoyed many careers and was known by all those that worked with him as a ‘good man’, and ‘one of the nicest persons’. Everyone that knew him stated he was always a positive, upbeat person, and a joy to be around. In life, Archer always viewed situations or circumstances as ‘a glass half full’. His love for knowledge led him to come to know Jehovah God. Having come to know the true God, Archer dedicated his life and was baptized on November 15, 1985 as one of Jehovah’s Witnesses. He enjoyed sharing his love of Jehovah with many, and was zealous in his ministry. Archer met Christine Fields, and soon found the one with whom he would share the rest of his life. They were married on December 20, 1997. Together, Archer and Christine were known as a loving, dynamic, and giving couple; and were loved by the friends in the various congregations they attended. They enjoyed so many great times travelling, and volunteering as pioneers – helping others to come to a knowledge of Jehovah. In their journey, they forged a bond that could not be broken. We all think of Archer and remember his laugh, the hum of a song, and his constant affirmation of “That’s exactly right!” When asked ‘how are you doing?’ Archer would reply, “I’m terrific!” His words were always witty, just so, and somehow, made things clear. As life and illness made things more difficult for him at times, he would often remark “My God will see me through this.” And, we remark: He has…and He will.” Archer was preceded in death by his father, Willie McGhee (2000), as well as his brother, Aaron (2013). He also leaves many family and friends who will mourn his loss: His dear wife, Christine; Mother - Dorothy McGhee; Sisters and Brothers – Linda, Willie (Marilyn), Terry, Nathan, and Jacqueline, the loving family of his wife, and a host of nieces, nephews, grand nieces and grand nephews… There are so many who loved Archer dearly, and will miss him.

Archer C McGhee was born on May 29, 1959 in Chicago, Illinois to Mr. and Mrs. Willie and Dorothy McGhee. Archer graduated from Carver High School in 1977, and received his Bachelor&#8217;s Degree from DePaul University in 1984. He was an avid... View Obituary & Service Information

The family of Archer C McGhee created this Life Tributes page to make it easy to share your memories.

Send flowers to the McGhee family.