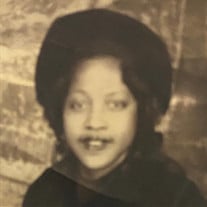 Audree Genola Andrews was born on August 6, 1924 in Florence, Mississippi. Her parents died when she was an infant and she was raised by her maternal aunt, Della Lockett, in Gulfport, Mississippi. Audree graduated from high school and was the valedictorian of her class. Audree graduated cum laude with a degree in chemistry from Samuel Huston College, in Austin, Texas. Her goal was to become a doctor. Unfortunately, due to segregation laws at the time, attending medical school was next to impossible. So, Audree became a high school math teacher, eventually teaching in the Chicago Public Schools. Shortly after arriving in Chicago, at a picnic, she met a handsome World War II Navy veteran name Charles Adams. They were married in 1949 and little did they know that their marriage would last over 60 years. In 1959, Audree was baptized as one of Jehovah’s Witnesses. Within six months of baptism, she was conducting five Bible studies. Audree had found her calling. She assisted many Bible students to baptism. Audree humbly gave all credit to her heavenly father. Whenever friends would ask her how many people she aided into the truth, Audree’s answer was always, “I don’t know.” Once, while preparing for yet another interview before a large audience, Audree wrote down the names of people she had aided into the truth. She came up with 42 names. A relative, knowing the number to be higher questioned Audree about this. Audree replied, “These are the ones I can remember.” Audree worked tirelessly in God’s service. One friend even called her, “The little energizer bunny”. Besides having a zealous share in the ministry, Audree was privileged to have a Congregation Book Study in the family home for over 21 years. The Adams door was always open. In addition, during the 1960s, due to a shortage of brothers, Audree was assigned to handle the financial accounts for two congregations. Also Audree set a personal goal of reading the Bible from cover to cover every year, which she did for decades. Audree was a diligent Bible student who handled the word of God aright. In 2019, Audree was happy to be able to attend Pioneer school again. On December 17, 2020, Audree fell asleep in death. Audree was preceded in death by her husband of 61 years Charles. Audree leaves to cherish her loving memories, her four children Harriet, Arlita, Clarice and Vivian; a sister-in-law Seretha Adams; three nephews, numerous cousins, other relatives, friends, and many spiritual children.

Audree Genola Andrews was born on August 6, 1924 in Florence, Mississippi. Her parents died when she was an infant and she was raised by her maternal aunt, Della Lockett, in Gulfport, Mississippi. Audree graduated from high school and was the... View Obituary & Service Information

Send flowers to the Adams family.