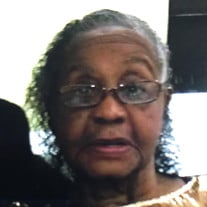 Barbara Tweed was born May 22, 1926 to the union of Robert Tweed and Margaret Withers in Chicago, Illinois. She was their only child. At the tender age of 5, she was baptized into Christ at Mt. Olive MB Church, 31th and King Dr. and was an active member there until 2012, when she moved to Florida to live with her son, Michael and his wife, Vernell. While residing in Florida, she joined the Homestead Seventh-day Adventist church and remained a faithful member until her passing. Barbara attended Chicago Public Schools. She graduated from Wendell Phillips High School. Barbara united in marriage to James Henry Brown and from this union 5 children were born, James Jr., Robert, Michael, Deborah and Patricia. In 1955, they moved into the Altgeld Gardens housing development, in Block 8 where they raised their family, with their children attending the Carver Elementary School system as well as Carver High School. Barbara began her career as a Beautician in the mid-60s, working with Ms. Ruthie Alford, also from Altgeld Gardens, Block 7, who had opened a beauty shop inside the barber shop in the shopping center located inside Altgeld Gardens; they went on to flourish and grow until Barbara opened her own beauty shop in the Roseland area. Barbara and Ruthie Alford grew so close, they considered each other as sisters, and their surviving family members today are still close. Barbara did “hair” until 2012, when her failing health caused her to move in with family members in Florida. Barbara was well known and loved by all whom she came in contact with, having a warm smile and a pleasant voice, she well represented her Jesus, who indeed was the head of her life. Barbara fell asleep in Christ Jesus on December 15, 2018. She was preceded in death by her husband James on December 1, 1995, and by both her parents. Her beautiful life will forever be cherished in the lives of her five children: James Jr. (Delores), Robert (Lori), Michael (Vernell), Deborah and Patricia. After they parted, James Sr. remarried and had another daughter, Kathleen, who came to know and love Barbara as her own mother, a vast number of grandchildren, great grandchildren and great-great grandchildren, one 1st cousin, Geraldine Buntyn-Cobb, good friends and former neighbors Mary Nash, Diane McGee and Mary and George Hampton, and a virtual army of relatives, church family members and friends from Chicago to Florida. She suffered with dementia, but the last name she remembered was Christ Jesus, whom she called on always. We should follow her example, by calling on the Lord, always.

Barbara Tweed was born May 22, 1926 to the union of Robert Tweed and Margaret Withers in Chicago, Illinois. She was their only child. At the tender age of 5, she was baptized into Christ at Mt. Olive MB Church, 31th and King Dr. and was an active... View Obituary & Service Information

The family of Barbara Brown created this Life Tributes page to make it easy to share your memories.

Send flowers to the Brown family.