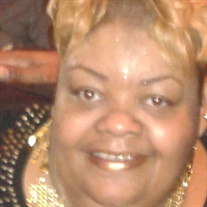 Benita Pierce Jones was born on April 30, 1960, in Chicago, Illinois to Bernice Pierce. Benita grew up on the south-side of Chicago. She graduated from DuSable High School in 1978. After high school, Benita attended Central YMCA Community College, in Chicago, IL where she received an Associate’s Degree in Business. She then worked in the business industry and spent a large part of her career working for non-profit organizations and the City of Chicago. Benita's work was her passion because she was able to help people build better lives through building skills and gaining experiences. Later in life, Benita went back to school and studied Health Technologies at DeVry University. Benita married Edward Jones in 2010 in Chicago, IL. They were married for eight years. Benita was a woman of faith and member of Spirit Baptist Church. Benita was affectionately known as "NENE" by her loved ones. She was known for her bubbly personality, big heart, and interpersonal skills. These qualities gave her a special place in everyone's heart. Benita was known for hosting her friends and family at her home, and she instantly made people feel like family. Benita worked hard, loved harder, and kept fighting. A motto that explained her approach to life was stated perfectly by Maya Angelou, “If you don’t like something, change it. If you can’t change it, change your attitude.” Benita's life brought joy to so many, and she will be missed. Benita Pierce Jones, 58, passed away on Sunday, June 3, 2018, at St. Bernard Hospital in Chicago, IL. She was preceded in death by her mother, Bernice Emanuel. Benita is survived by her spouse Edward Jones; her stepson Edward Jones Jr.; her brother Micheal Pierce Sr. (wife Pamela); sisters Sharon Pierce Levy and Yvette Pierce; and her God-daughter Andrea Patterson. Benita had a host of loving nephews, nieces, numerous other relatives and friends.

The family of Benita Pierce-Jones created this Life Tributes page to make it easy to share your memories.

Send flowers to the Pierce-Jones family.