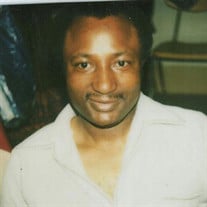 Ben was born in Clarksdale, Mississippi on August 22, 1936 to Estella Whitfield and Benjiman Crawford. His childhood nickname was Scooter. Ben moved to Chicago, Illinois in the 1950’s and in 1957, he married Alma Jean Anderson and to this union two children were born. Norma Jean and Benjiman “Bennie”. He helped to raise his granddaughter, Tameka Sheree Rawls who he affectionately called Sheree. He also helped in raising many others too. Ben was a hardworking man. He worked for the Ice House on State Street, later drove for Yellow Cab for 18 years, was a limo driver, drove for Midwest Funeral Home, and retired from Chicago Transit Authority after nearly 30 years of service. Ben was such a likeable person. He was humorous in his own way. He made sure his family had the necessities of life. He always tried to help any and everybody. He has often let people stay in his home if they had nowhere to go and was willing to give of his time and finances to help others. He was a free-hearted person. He loved music and especially liked listening to the Blues. In 2013, Ben became sick and was not able to stay by himself and for a time he lived with his son Bennie. Later, Ben moved back home and lived with his daughter and son-in-law. Ben enjoyed the help of his Home Care Aid, Tommie Thompson who was more like a son to him. Ben enjoyed the help of his CNA, Kristie Brannon who he called Baby Girl and his Nurse, Stephanie Garcia. Ben enjoyed going to Chicago Commons Day Care Center on Pace three to four times a week where he was affectionately known as Benji. Truly, during Ben’s last years of life he has had an excellent support system. There are many who will mourn Ben but these are a few who were a part of Ben’s life during his last years; Norma Madkins (Marvin Lee), Benjiman Crawford Jr., Dennis Hill, Donald Washington, Tameka Sheree Rawls, Brandon Harris, Collette (Mario) Richards and Benay Crawford; Theora Horne, Gary Henry, Gary Henry Jr., Tommie Thompson, Helena Boatwright, Roosevelt (Doris) Rhimes, Emma Smothers, Karen Darring, April Kuykindall, Angela LaBranche, Grace Allgood, Ira Lee Starks, Willie Bee Tatum (Stenson) Izora Hamilton, and a number of grandchildren, great grandchildren and a host of relatives and friends too numerous to mention.

Ben was born in Clarksdale, Mississippi on August 22, 1936 to Estella Whitfield and Benjiman Crawford. His childhood nickname was Scooter. Ben moved to Chicago, Illinois in the 1950&#8217;s and in 1957, he married Alma Jean Anderson and to... View Obituary & Service Information

The family of Benjiman Crawford created this Life Tributes page to make it easy to share your memories.

Send flowers to the Crawford family.