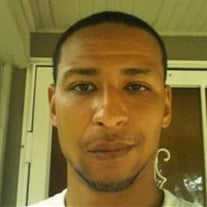 It is with great sadness that the family of Brian Vershaun Herman, affectionately known as “Beano”, “88 fingaz”, ”Gouch” and “Boopie”, announces that he fell asleep in death on Tuesday, May 18, 2021 at the age of thirty-eight. Brian was born on July 1, 1982, in Chicago, Illinois to Angelo Herman and Denise Ferrell. Brian was preceded in death by his father, Angelo Herman; his maternal grandparents, Bettie Jean and Jesse Lee Ferrell Sr.; his aunt, Sibyl Marcia Handy; and his paternal grandparents, Patricia and Arthur Herman; and his uncle, Arthur “Artie” Herman Jr. Brian knew his heavenly father, Jehovah and his son, Jesus Christ. When he was young, he studied the Bible with his family and Jehovah’s Witnesses. Brian understood the teachings of the Bible, including the promise of the resurrection at Acts 24:15 where it reads, “And I have hope toward God, which hope these men also look forward to, that there is going to be a resurrection of both the righteous and the unrighteous”. Brian found comfort in knowing that Jehovah will never forget him, and he maintained his hope in the resurrection. Brian graduated from Homewood-Flossmoor High School in 2000. After graduation, he enlisted in the United States Navy. He continued his education at Southeastern Illinois College where he studied Automotive Mechanics. He also attended C.R. England Truck Driving School and was trained to drive semi-trailer trucks. Brian was a jack of all trades. He could basically repair anything. He had a variety of employers Brian also collaborated with his brother Devin Mayfield, in Kings and Kicks, a company that refurbished gym shoes. Brian was an extremely passionate person. If you were his friend, there was no limit on what he would do for you. If you were one of the rare people he loved, you received the best gift possible. However, if you were perceived an enemy, all bets were off. Brian leaves to cherish his memory, his spouse, Shaquietta Brinson; step children, Sumaiya, Sumarion, Rumarious and Amaru; his children, Keion, Ameerah, Sa’niece, Denise, Lyric and Sampson; his mother, Denise Mayfield; his sister, Jeniece Herman; his brother, Devin Mayfield; one aunt, Sharlene Ferrell Bymun (Andrew/Pappy); two uncles, Jesse Ferrell Jr. and Anthony Herman; two nephews, Jordan and Jovan Hall; seven cousins, Anthony Herman Jr., Melanie Pettigrew (Raynard), Melissa Gilbert (Nathaniel), Yalonda Mason, Andrew Bymun III, Jesse Lee Bymun, and Beverly Geana Ferrell; very good friends. Edward Baker, Jason Clark “JB”, and C’oni Shegog; and a host of other relatives and friends.

The family of Mr. Brian Vershaun Herman created this Life Tributes page to make it easy to share your memories.

It is with great sadness that the family of Brian Vershaun Herman,...

Send flowers to the Herman family.