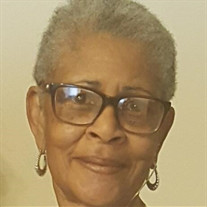 CALLIE LEONA FINLEY was born May 21, 1933 in Vicksburg, Mississippi to Benny Finley and Callillie Stimage. Callie moved to Chicago, Illinois with her mother. She joined Vernon Baptist Church. Callie attended classes at Loop Junior College in Chicago. She was employed as a Payroll Clerk at Amoco Oil until she began her employment as Payroll Supervisor with the City of Chicago, Streets and Sanitation, until she retired. Callie was united in marriage to Samuel Burke. They were married for over 40 years and from their union Sandra was born. Callie was the loving and devoted mother of Jimmie, Lorri and Sandra. Callie was a lifelong member of Vernon Baptist Church, where she enjoyed serving the Lord as an Usher, fellowshipping with church members and serving as Master of Ceremonies for church events. She was a talented bowler having won many tournaments, including Chicago Sun-Times “Beat the Champs.” She relished in cooking and baking; two mainstays were her pound cake and lemonade cake. Anyone who had her pound cake discovered it to be the best they ever tasted, and most people had no idea what a lemonade cake was but after trying it, always wanted more. She enjoyed crocheting and reading. She had a generous heart and was always giving clothing or other items away. If you needed it, she had it or would find it. You could never leave her empty handed. She loved to pose and model her outfits and hats. Callie found joy and purpose in surrounding her children and grandchildren with love, support, and guidance. She led her life in faith and always told others to “put it in God’s hands.” Callie’s life on earth was well lived. She was loved by all who knew her and will be greatly missed. At the graceful age of 87, Callie passed away on December 28, 2020, after a courageous battle with illness, surrounded by loved ones at her bedside. She was preceded in death by her parents, Benny and Callillie, her husband, Samuel, her son Jimmie Lyle and her sisters Vivian Dawson and Gladys Stewart (Dawson). Callie leaves to cherish her memory: two daughters, Lorri Scott (Maurice) and Sandra Young (Robert); six grandchildren, Trina Lyle, Jule Lyle, Jamien Lyle, Jimmie Lyle, Jr., Harper Lauren Scott and Sydney Young; three great-grandchildren; a sister, Janice Jackson; a special cousin, Beverly Elliston; a special friend, Yvonne Williams; and a host of nieces, nephews, cousins, other relatives and friends.

The family of Callie Burke created this Life Tributes page to make it easy to share your memories.

CALLIE LEONA FINLEY was born May 21, 1933 in Vicksburg, Mississippi...

Send flowers to the Burke family.