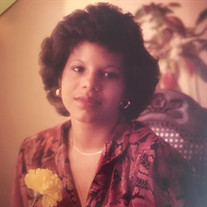 Carleda Anderson was born in Chicago, Illinois on October 23, 1960 to Carl and Haweda Irving. After moving from Chicago to the south suburbs she graduated from high school, as a proud Crete-Monee Warrior. She then attended Barat College in Lake Forest. Carleda later met and married the love of her life, James Anderson. They shared 37 years and raised three wonderful children together. She was a compassionate mother and wife, dedicated to raising her family. Her children and later on her grandchildren were her world. In the early 90's she started learning about Jehovah. Carleda dedicated her life to Jehovah and was baptized on November 19, 1994. In 2000, she began serving as a regular pioneer. To Carleda, the full time ministry was her entire life. She could not help but to preach to everyone, everywhere about the good news of God's kingdom. Carleda was the epitome of a capable wife as described at Proverbs 31:20 " She extends her palm to the lowly one, And she opens her hands to the poor." Carleda was always ready to share with anyone, it didn't matter if you were family, or friend or a stranger on the street. There was always a comforting scripture, wise advice, a hug, a smile, a plate of food and a home waiting for you. She would give you anything, right down her last belongings; she would give you anything, even if it cost her last bit of energy. Everyone who knew her knows she was the most loyal, persistent and above all else, loving person you could ever have the privilege of knowing. Just like Lydia in the Bible, she poured herself out in giving to others. Acts 16:15 certainly applied to Carleda, "She urged us: “If you have considered me to be faithful to Jehovah, come and stay at my house.” And she just made us come." She never gave up. Our dearest Carleda fell asleep in death on April 1, 2019. She was preceded in death by her father Carl. We eagerly await the promise of the resurrection, just as she did, a world with no more sickness or death or pain (Rev. 21:3,4). Carleda leaves to cherish her memory, a loving husband James Anderson Jr.; six children Rita, Ericka, Keisha (Robert), Lynze, James (Tanessa), and Julian (Stephanie); honorary daughter Khybrette (Nigel); her mother Haweda; two brothers Virgil Poole Jr. and Carl Irving Jr.; two sisters Carla Irving and Stephanie Burton; twelve grandchildren Kynzley, Justin, Erin, Kahmari, Carter, Kameron, Kylon, Tayler, Morgan, Nathaniel, Kalaysia, and Robert Jr.; three great grandchildren; and a host of nieces, nephews, family and many, many, many friends.

Carleda Anderson was born in Chicago, Illinois on October 23, 1960 to Carl and Haweda Irving. After moving from Chicago to the south suburbs she graduated from high school, as a proud Crete-Monee Warrior. She then attended Barat College in Lake... View Obituary & Service Information

The family of Carleda Anderson created this Life Tributes page to make it easy to share your memories.

Carleda Anderson was born in Chicago, Illinois on October 23,...

Send flowers to the Anderson family.