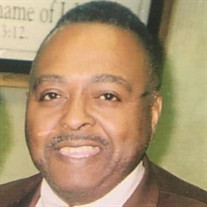 Charles Edward Settles was born October 13, 1953 in Chicago, Illinois to Lloyd Henry Settles and Violetta Leach, both of whom preceded him in death. Charles attended Lane Technical High School and the University of Illinois at Chicago (UIC) with majors in Engineering. In 1987, Charles met and married the love of his life, Cheryl Robinson, and together they raised two children and one grandson, who became endeared to him. Charles had many interests, including photography and computers. For those who knew him, he was very intelligent and “tech savvy”. Charles would take a computer apart and put it back together again! It was amazing to watch. As a young adult, Charles enjoyed tennis and he would play tennis until the street lights went out. He enjoyed scouting and was instrumental in teaching children and teens how to swim, hike, and camp outdoors. Later when he married, he enjoyed some of these same activities with his wife and children. Charles was also known for making a mean, homemade, deep dish, mouth-watering, Chicago style pizza from scratch! It was simply delicious. Charles worked tirelessly at many jobs, including working on Greyhound buses as an Auto Mechanic, 13 years at Addison Pipe and also, 19 years at Metropolitan Water Reclamation District (MWRD), a job Charles loved, where he had many friends and coworkers, who became endeared to him. Charles was known to be a quiet man, and an analytical thinker. But, for those who knew Charles, that didn’t stop him from having a mischievous sense of humor, that kept us smiling and tickled. That humorous personality, along with a quiet and mild spirit, would make anyone feel relaxed and happy to be around him. In 1984, Charles studied the Bible and became one of Jehovah’s Witnesses, where he loved to share his faith with others and a bright hope for the future, under the rulership of God’s Kingdom and the rule of Jesus Christ where no one will become sick or ever have to face death again. Charles leaves to cherish his memory, his loving wife, Cheryl; children, Tiphanie (Terrell) and Jason (LaKeya); grandson, Darrion; siblings, Dwight Settles (Lynne) and Letitia Settles; and a host of nieces, nephews, cousins, aunts, uncles, family, and dear friends.

Charles Edward Settles was born October 13, 1953 in Chicago, Illinois to Lloyd Henry Settles and Violetta Leach, both of whom preceded him in death. Charles attended Lane Technical High School and the University of Illinois at Chicago (UIC)... View Obituary & Service Information

The family of Charles Edward Settles created this Life Tributes page to make it easy to share your memories.

Send flowers to the Settles family.