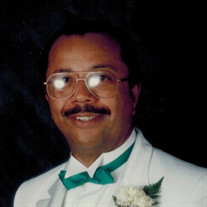 Charles Edward Williams was born October 2, 1935 to James and Mary Williams. He was the oldest of three children. Charles grew up in Cairo, Illinois where he graduated from Sumner High School in 1955. Charles served in various positions while in high school: Class President, President of Teen Town, Treasurer of Student Council, Football Player, and as a Member of the Honor Society. In the latter part of 1958 Charles met Dorothy Howard and fell madly in love with her due to her fine cooking and other great homemaking qualities. Charles and Dorothy (Dotty) married on August 19, 1959 and raised their children Michael Mazique and Natalie. Many people know of the selfless acts of Charles hard work and that of helping others. As a diligent person his work took him to the outskirts of Detroit, Michigan in the late 80’s; there he continued to be a wonderful provider and caregiver of both his late father-in-law and uncle. Charles retired from Northwest Airlines (now Delta) as a Fleet Services Manager. At Northwest, he was known as a fine and diligent worker. Though Charles had many fine skills and wonderful accomplishments, most of these came from his training as one of Jehovah’s Witnesses. Charles dedicated his life and was baptized as one of Jehovah’s Witnesses on July 26, 1969. Throughout the years Charles served as an Elder and a Regular Pioneer in various congregations in the Chicagoland area and Detroit. During his many years of service, he has helped to mentor, aide and train various brothers and sisters as well. Charles greatest love was that of following in the footsteps of his exemplar of his faith, his Lord and Master Jesus Christ. The scriptures said of Jesus at John 7:46 “Never has any man spoken like this.” And in our modern error the same has been spoken about Charles. To have been in his presence and to hear him speak was like taking a hold of a valuable jewel, a pure pleasure, and yet a wonderful experience. Charles imparted wisdom by way of Love to all who came into contact with him. He was simply a joyful and loving servant of Jehovah. Charles leaves a legacy behind for all who knew him to follow; one legacy was that of being in the Ministry helping others to learn about his Heavenly Father Jehovah, selflessly serving the friends in the Christian Congregation, and his greatest is that of remaining a Stalwart, Integrity Keeping servant of Jehovah. On December 9, 2017, Charles Williams fell asleep in death. He was preceded in death by his parents, James and Mary Williams; his sister, Mary Magdaline; and his son, Michael Mazique. Charles leaves behind to reflect on his legacy his Wife, Dorothy “Dotty”; Daughter, Natalie; Sons, Cornelius Glenn and Eric Williams; his Sister, Ollie Rose Watson; Brothers and Sisters-in-Law, Walter Howard (Earlene), Evelyn Jones and James Wilson, Grandchildren, LaShawna Mazique-Stuart, Darnaz Trimuel, Ghaffar, Anwar, Faizal and Medina Glenn and Timothy Carter; Great Grandchildren, Mikaela Stuart and Giovanni Glenn; along with a host of Nephews, Nieces and other close Friends.

Charles Edward Williams was born October 2, 1935 to James and Mary Williams. He was the oldest of three children. Charles grew up in Cairo, Illinois where he graduated from Sumner High School in 1955. Charles served in various positions while... View Obituary & Service Information

The family of Charles Edward Williams created this Life Tributes page to make it easy to share your memories.

Charles Edward Williams was born October 2, 1935 to James and...