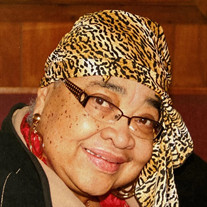 Christine Etreanna Hall Robinson was born December 29, 1939 to Major Hardin and Flora Newman in Killen, Alabama. She completed her high school education in Sheffield, Alabama. Christine moved to Ford Heights (formerly known as East Chicago Heights), Illinois as a young woman. In Ford Heights, she met and later married Robert O.B. Hall on April 16, 1956. The two were blessed with over 34 years of marriage and reared 9 children together. Christine accepted Christ at a young age. She was an active member of Pentecostal Church of Christ (PCC) since November 1986. She served as the Church Clerk and the President of the Usher Board for several years. She was a pillar of her church, well known for her Fancy Suits and Hats, and sought out as a Prayer Warrior for those in need. The love she showed for friends and family was evidenced through her prayers. She attended South Suburban College where she obtained a degree in Business Administration. Say the name Christine Hall Robinson and everyone in School District 169, where she served as an Administrative Assistant, would smile. She was a mother, friend, educator, counselor and secretary at Cottage Grove Middle School for over 42 years. She was loved, respected and the person you called, when you needed something done. On October 19, 2020, Christine Hall Robinson heard the Lord’s call, “Well done my good and faithful servant”, closed her eyes and rested from her labors. She was preceded in death by her father Major Hardin; 1st husband Robert O.B. Hall; 2nd husband Bill Robinson; son Ronald Hall; and brother Glen Hardin. Christine leaves to cherish her memory and celebrate her legacy, her mother Flora Newman; sisters Eileen Lofton, Bobbie Nell Tellie, and Vivian Abernathy; brother Robert Newman Jr.; children Calathia Wilkerson, Daryl “Dell” Hall, Livingston (Pershall) Hall, Kerwin (Edith) Hall, Alvilda Hall, Robert (Schlanda Heartly) Hall III, Sabrina Hall, Timothy Hall, Forrest (Rosalyn) Hall, Bruce (Diane) Dillard, Marvin (Carla) Dillard, and Timothy Hall DDS inspector for City of Chicago for over 27 years; and a host of grandchildren, nieces, nephews, cousins, friends, and very special friends Beatrice Washington and Samuel Lawrence friends for over 40 years and co worker at Cottage Grove Middle School, Helen Brinson, and Mr. and Mrs. Will and Pauline Hunt.

The family of Christine Hall Robinson created this Life Tributes page to make it easy to share your memories.