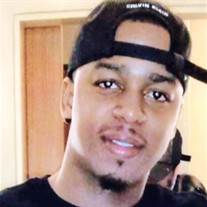 Chris was born in Chicago, Illinois on February 19, 1993 to Wanda Watson and Eddie Niles. Chris attended Langston Hughes Elementary School and Harlan Community Academy where he graduated in 2011. He later attended the International Academy of Design and Technology. Chris had a passion for fashion and had big dreams of becoming a fashion designer. Pure Vision is the name of his brand, which he created at the age of 15 in high school. Chris was very determined young man and worked hard for the things he wanted. By the age of 24, Chris purchased his dream home, drove the car he wanted, and achieved a lot of other things. Chris was really into music, J-Cole being one of his favorite artists. Chris had a smile that would brighten up anyone’s day. Chris was a laid-back, cool, smooth type of guy. He had very expensive taste and paid close attention to detail. Chris was an extremely friendly and positive person. He always had encouraging and motivational words to share with everyone he knew. Chris is loved by many and he was given the nickname Lil Chris in his neighborhood. Chris accepted Christ an early age. On October 1, 2017, Chris transitioned over to paradise. Chris was preceded in death by his grandmother, Johnnie Mae Watson; great-grandmother, Gurlee Watson; grandfather, Hardy Lee Browner; and first cousin, Deonté Watson. Chris leaves to cherish his memory, his parents, Wanda Watson and Eddie Niles; seven sisters, Juwanda, Shalita, Keona, Johnnie Mae, Alexis, Tahorra and Tatyana; two brothers, Derrick and Vernon; four nephews, Tyrese, Dominique Jr., Dhani and Derrick Jr.; two nieces, Jaylah and Brooklyn; one godson, Jemel Jr.; aunt, Stephanie (Reese); he also leaves behind Matthew and Rochelle Jones who raised him; grandparents, Kenneth and Rosetta Crawford; five bonus siblings, and a host of great aunts, uncles, cousins and friends.

The family of Christopher Browner created this Life Tributes page to make it easy to share your memories.

Send flowers to the Browner family.