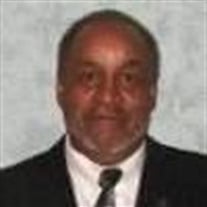 Clifford (Pete) attended Ford Heights School District 169 and Bloom Township High School before enlisting with the United States Army where he served three years active duty as Sergeant, before continuing his loyalty to his country as a lifelong member of the Army Reserves. Upon his return home from the Army, Pete was employed by ABC Rail in Chicago Heights, Illinois where he was Union Steward under, The United Steel Local Union. Pete was a fierce leader and supporter of worker unions and fought for workers and their families. He was truly, a genuine soul who donated money, time and efforts to help anyone in need including, volunteering with Hurricane Katrina relief efforts. Pete was always going above and beyond the call of duty to ensure that the needs of his daughter, family and loved ones were indeed, his top priority. From the changing of a flat tire, to fixing a broken faucet, to the installation of a new furnace or the completion of major electrical work at his church. His dedication and service to others did not go unrecognized or unnoticed. Pete was also an entrepreneur and in the early 2000’s, he officially started his own business, C&N Electrical and Carpentry Services. His hard work was unmatched as he not only worked his business, but also maintained a position for School District 169 in Ford Heights, Illinois. In 2015, Clifford began working for Prairie Hills School District 144 in Markham Illinois, where he would later retire in May of 2019. Pete was extremely dedicated to his Church, Family, Friends, and Work. His greatest joy in life was in the birth of his daughter, Neiche D. Rush, born on January 14. He was a handyman to his core. He took pride and pleasure in performing a myriad of tasks for his siblings, nieces, nephews and friends. There was no job “too big” or “small” for Brother Cliff, Uncle or Cousin Pete. He was truly one, in whom you could depend on through the good times and bad; through, thick or thin. Pete enjoyed spending time with friends and family. He was an avid bowler, often participating in bowling leagues throw-out the south suburbs. Another one of his greatest joys, was showcasing his skills on the grill at every family gathering or cookout. At almost every bar b que, union picnic, or family reunion, you were sure to find him on the grill. We were all tremendously blessed to sample and indulge in every rib tip, hot wing, hot link, Italian beef combo, and grilled chop sandwich. Clifford (Pete) Rush peacefully made his transition on Sunday, December 29, 2019. He is survived by his daughter, Neiche D. Rush (Mother Neico Monroe); mother, Ruth Rush; two sisters, Mrs. Gloria Weekley (Tyrone), Mrs. Leoria Rush-Bady (Odether), two brothers, Pastor Charles Rush (Cherryce), Pastor Wyatt L. Rush (LaTeyce); godson, Kaiden Hoskin; and a special friend, Damaris Payne. He also leaves behind a host of loving relatives and friends.

Clifford (Pete) attended Ford Heights School District 169 and Bloom Township High School before enlisting with the United States Army where he served three years active duty as Sergeant, before continuing his loyalty to his country as a lifelong... View Obituary & Service Information

The family of Clifford Rush created this Life Tributes page to make it easy to share your memories.

Send flowers to the Rush family.