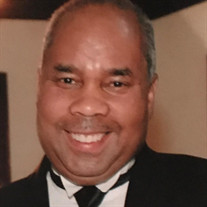 Cordell was born on December 23, 1954 in Chicago, Illinois. The son of Crable Ivy and Doris Louise Gainwell-Ivy. He is preceded in death by both of his parents and his sister Eileen. A product of the Chicago Public School System, Cordell attended George Dewey Elementary and Edward Tilden High both on the South Side of Chicago. During his school days he played basketball, football, and baseball. After graduating from high school, Cordell gained an Associate Arts Degree in Accounting from Kennedy King Jr. College. In July 1974, he dedicated his life to Jehovah in prayer, but due to illness was unable to be immersed in water baptism until April 5th, 1975. On May 27th, 1978, he married Gwendolyn Theresa Starks. With help from Jehovah, his loving family and many friends, he endured 4 heart attacks, and 32 major surgeries in his 43 years as a dedicated servant of God. It was Cordell's desire to serve Jehovah to the fullest despite any physical ailments. He served as a regular pioneer and attended the Pioneer Service School twice. He also had the privilege of aiding several people in the truth. For 23 years he "shepherded the flock of God under his care" as an Elder. (1 Pet 5:2) Cordell will be remembered for his quick wit, deep knowledge of God's word the Bible, wise advice, and his love of reading Christian publications. Family and friends also think fondly of his enjoyment in watching sports and eating food. Cordell leaves to cherish his memories, his wife Gwendolyn Theresa; four children Cordell Jr. (Arkeisha), Yvonne, Kiel, and Victor; his siblings Robert Andrew, Crable Jr., and Sarita Yvette; four grandchildren Anthony, Erin, Sascha, and Kassidy; and one great grandchild Anthony Jr.; along with a host of other relatives and friends. 2 Corinthians 4:16 - Therefore, we do not give up, but even if the man we are outside is wasting away, certainly the man we are inside is being renewed from day to day.

Cordell was born on December 23, 1954 in Chicago, Illinois. The son of Crable Ivy and Doris Louise Gainwell-Ivy. He is preceded in death by both of his parents and his sister Eileen. A product of the Chicago Public School System, Cordell attended... View Obituary & Service Information

The family of Cordell Ivy created this Life Tributes page to make it easy to share your memories.

Send flowers to the Ivy family.