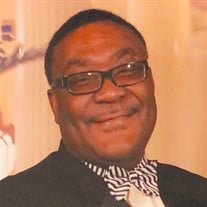 Dale Allan Craft was born May 27, 1959 at 7:04 a.m., 8lbs 2oz. He was the third child of Milford Allan and Velma Jean Craft. He started his education on the west side of Chicago attending Melody Elementary School. Later, the Craft family moved to the south side of Chicago where Dale completed elementary school at Samuel L. Gompers. Dale went on to attend George H. Corliss High School. He took an interest in sports with a love of football. Starting as a Defensive End, Dale became a letterman wearing the number 80, nicknamed ‘Bingo’. Dale continued a lifelong friendship among many of his peers and fellow classmates as a dedicated member of Corliss Alumni Assoociation. Dale met and fell in love with the love of his life, Dianne Jones and they were married on January 11, 1987, in Chicago, IL. Dale and Dianne became the parents of two sons, Fredrick and John Craft. Dale dedicated his life to serve Jehovah and symbolized his dedication through water baptism on January 29, 2000, becoming one of Jehovah’s Witnesses. Dale enjoyed his service to Jehovah where he spent countless hours in the ministry teaching others about the Bible. Dale loved a life that was full of joy and happiness. If you knew Dale personally then you know how contagious his laughter was along with his smile. His laugh would make the gloomiest day feel like sunshine. Along with his contagious smile, was his larger than life personality. Affectionately known as Gentle Giant, Dale love being around people regardless of if knew you or not. He was the kind of person that didn’t have any struggles striking up a conversation. The other things Dale enjoyed in life was attending concerts where he was famously known as “Top Flight Security”. Dale enjoyed listening to all genres of music, especially Prince. He enjoyed watching all sports, especially football and attending NASCAR races. Dale was widely known for his impeccable style and was always dressed to impress. Because of his large presence, he was loved by many and will truly be missed by his Craft family members, his Jones family members, his family from Mississippi, his Corliss High School family, his trusted best friend Darnell, his friends he developed since dedicating his life to Jehovah God, and his friendships he developed during his career. Nothing, however, made Dale happier than the love of his adoring wife Dianne of 34 plus years. Dale loved to travel to various countries with Dianne as his trusted companion. They were truly great dance partners at any event they attended. You could see them every year at We Care From The Heart’s annual black tie affair, dancing the night away as they were showcased as Mr. and Mrs. Craft. You could see them embracing each other in love. The love of his wife was so immense you could see it through the many pictures that were taken of them together. Together Dale and Dianne raised their boys John Craft and Fred Craft. Dale left a legacy for not only his sons but for his grandchildren to follow. Dale had an infectious passion for helping persons with intellectual and physical disabilities. He assisted his wife Dianne Craft in educating the public on the various services and programs available to families who are caretakers to persons with disabilities. If he didn’t know the answer he would send you to his wife or his secular family, the staff of We Care From The Heart and the staff at Preferences Health Services. On February 18, 2021 at 11:26 p.m., Dale fell asleep in death. He was preceded in death by his father Milford A. Craft; his sister Harriet Nadine Craft-Keys; the Jones family ~ Mary Lee Jones, Nathaniel Jones Sr., Gregory, Nathaniel Jr., Claudia Blake, Phyllis Lark and Schozzola Jones. Dale’s memory will be cherished and kept alive by, his adoring wife Dianne J. Craft; his sons, Fredrick Craft and John Craft (Tamesha Sheppard); his grandson Malakai Craft; his mother Velma J. Craft; his brothers John Craft (Lisa), Tommy Craft (Katie); The Jones Family ~Zachary (Cynthia), Derrick (Geri), Jamanil (LaTonye), Desiree Billups (David), Antonio; his brother from another mother, Darrell Rias, Dale’s Corliss Family ~ Clyde and Deidre, Steve and Premi, Bradley, Cindy, Deborah, Pam Carpenter, Jeff and Charlotte, Nicky and Mitch, Dale’s clients ~ who were more like his sons, Matt and Joe, as well as a host of nieces, nephews, cousins and friends.

Dale Allan Craft was born May 27, 1959 at 7:04 a.m., 8lbs 2oz. He was the third child of Milford Allan and Velma Jean Craft. He started his education on the west side of Chicago attending Melody Elementary School. Later, the Craft family moved... View Obituary & Service Information

Send flowers to the Craft family.