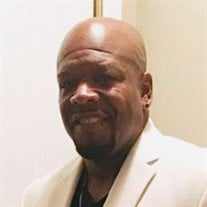 Born to Vergie Harris and raised by Ramona Montgomery, he lived life to the fullest. Residing in various locations within the Chicagoland area including Harvey, Hazel Crest, Hoffman Estates, and Palatine. Attending elementary school at St. Christopher of Midlothian, Illinois, where he excelled on the basketball team, and high school at Marian Catholic of Chicago Heights, where he excelled on the wrestling and track and field teams before attending Kennedy King College. An avid sports fan enjoying participating and watching sports such as wrestling, basketball, baseball, and football with a particular passion for Boston, Massachusetts based teams such as the New England Patriots and the Boston Celtics. But he also was a loyal follower of the local Chicago teams, particularly the Chicago White Sox. Damon enjoyed life and took advantage of the opportunities he worked hard to attain. In addition to sports, he enjoyed traveling via cruise lines and spending hours upon hours with his countless friends nationwide. When he wasn’t spending time enjoying the fruits of his labor, he worked hard as a Machinist for the Burlington Northern Santa Fe Railroad. On November 16, 2018, Damon departed this life resting from his labors. He was proceeded in death by his loving grandmother, Ramona Montgomery. Although never married and did not father any children, he is survived by the special lady in his life, Kim Gumiran and her son Danny Thomas whom Damon viewed as his own son; Goddaughter Sydney Joyce; and his special friend Heather Johnson. Although he had no siblings, he is also survived by his forever brothers Dwayne Cooper, Brian Hoffman, Aquate Roberts, Kevin Russell, Sr., and Darryl Thompson; and his forever nieces and nephews Johnathan Russell, Kevin Russell, Jr., Lynnetta Russell, Aliayah Scott, and Kraig Bryan.

Born to Vergie Harris and raised by Ramona Montgomery, he lived life to the fullest. Residing in various locations within the Chicagoland area including Harvey, Hazel Crest, Hoffman Estates, and Palatine. Attending elementary school at St.... View Obituary & Service Information

The family of Damon B. Ross created this Life Tributes page to make it easy to share your memories.

Born to Vergie Harris and raised by Ramona Montgomery, he lived...

Send flowers to the Ross family.