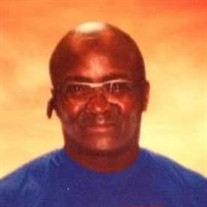 Daniel “Romeo” Yarbrough was born May 19, 1969 to the union of David and Lucille Yarbrough. He was the sixth born out of eight children. His mother said he was the one who marched to the beat of a different drummer. Daniel attended Curie High School and The Washburn Institute. He finished his education at Westwood College earning his Bachelor’s degree in Criminal Justice. Daniel married Cheryl Yarbrough and had a 25 year union that resulted in two sons. He was a husband dearly loved and cared for. When we remember Daniel, we think of the man with the impish grin and how funny he was. In any tense situation he’d be the one to break the tension in a room with some silly joke. His antics always brought us a good laugh. He always had something funny to say. We smile when we recall his love for his favorite comic book hero. Daniel was Batman. We remember that he was the one you could depend on in need. Daniel always answered the call for help. Whenever his children needed him, he was there to back them up. Never any judgement. We think about the joy and pride he felt at the birth of his grandchildren. How completely smitten he was with his granddaughter Ariana, nothing was ever too good for her. We’ll remember his committed work ethic. Daniel had a brave heart and a courageous nature. Those that he called friends were friends for life. Daniel lived his life to the fullest and on his terms. His favorite running joke was that he has been 26 for 25 years. Although recently on the 19th, he said he turned 27. Daniel was an artist and a poet. He won a $500 rap contest for Operation Push. He was always Walter’s running back on the Yarbrough Football team. Daniel leaves behind, his six children Danielle, Devante, Ra’Mone, Brandon, Raven, and Kyle; eight grandchildren Jayvion, Jayden, Ariana (his Moo Moo), Aiden, Austyn, Amir, RJ, and Zelaya; seven siblings Denise (Ed), Andre (Carol), Walter (Shanika), Nanette, Maurice (Sanji), Alisa, and Antoine; his loving mother Lucille; and a host of cousins, aunts, uncles, nieces, nephews, and devoted friends. Daniel fell asleep in death on Monday, May 20, 2019. His father David proceeded him in death. He will be dearly missed.

Daniel &#8220;Romeo&#8221; Yarbrough was born May 19, 1969 to the union of David and Lucille Yarbrough. He was the sixth born out of eight children. His mother said he was the one who marched to the beat of a different drummer. Daniel attended... View Obituary & Service Information

The family of Daniel Yarbrough created this Life Tributes page to make it easy to share your memories.

Send flowers to the Yarbrough family.