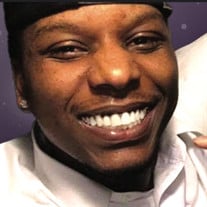 Darius Jaleel Sanders Sr., affectionately known as “Money”, was born November 15, 1992, to Derrick and Dr. Carolyn Sanders in Chicago, Illinois. Darius accepted Christ and became a member of Warner Robins CME under the guidance of his teacher and mentor Evangelist Angela Wootson at a young age. Darius graduated from Warner Robins High School in Warner Robins, Georgia. He proceeded on to receive a bachelor’s degree in Accounting from Chicago, State University. While there he served as the student government senator, president and pledged to the Omega Psi Phi Fraternity, Inc. Epsilon Eta Chapter, to which he loved and served faithfully. He was the first proud recipient of the LL Cool Jay Scholarship. Later he became an active member of the Berwyn Lodge 839 Grand Lodge Illinois Masonic Organization. Darius was loved by and known to many people. He embraced every opportunity to grow and flourish as a man and to embrace everyone he met. His warmth and smile radiated to every heart he touched. He was a dreamer and believed that he could succeed in anything he put his mind and heart to and was often successful in doing just that. His Lord called him home on April 8, 2022, at the young age of 29. Darius leaves a large loving family including his father, Derrick Sanders; his mother, Dr. Carolyn Sanders; two sons, Darius Jaleel Jr. (Leah Cockrell) and Aaron Alexander (Aadaisha Stevens); three sisters, Nicole Smith, Dr. Crystal Jordan Sanders, and D’Andre Sanders; grandmother, Doris Sanders; three uncles, Melvin Sanders, Gregory Smith and Michael Smith; three aunts, Debra Greer, LaNita Safforld, and Cheryl Smith; as well as host of nephews, nieces, cousins and friends.

The family of Mr. Darius Sanders Sr. created this Life Tributes page to make it easy to share your memories.