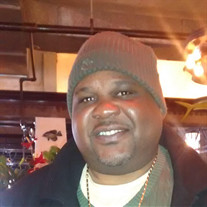 Darnell “Coo” Johnson was born Saturday, March 8, 1969 to Veola Whigham and Burnell Johnson. Darnell went to Countee Cullen Elementary School where he met his three best friends, Mark Willis, Robert Durr, and Flynn Jefferson. As a child, Darnell was known to have a genuine curiosity about life, with a fearless attitude. These traits followed him into adulthood, as he led a life completely unbound of adventure and self-discovery. Darnell enjoyed playing sports as well as watching them. He was known for pulling a team together to play a game of softball or playing basketball on the weekends. Darnell was also a man who knew how to have a good time. He enjoyed gathering with family and friends on the deck and getting on the grill. There was always a room full of laughter and good time vibes when he was around. He was a charismatic guy who made a friend or connection everywhere he went. It was hard to ignore him and even more difficult not to love him. Darnell was honored to be employed by the Chicago Transit Authority (CTA) like his mother, of which she retired. Although an employee of CTA he was also an unofficial tour guide for Chicago. You could ask him any question and he had a recommendation for you, a friend he knew that worked there, or someone who could help you out. He knew exactly where all the best spots were and had an adoration for Chicago music. Darnell Johnson will be remembered as a son, brother, friend, coworker and most of all, father. He was a modern-day renaissance man, always coming up with a way out of no way. There was never a task too big, a job too hard, or a distance too far for Darnell. You could always count on him to be there for you whenever you needed him, in any way he knew how. A month shy of his 50th birthday, Darnell Johnson passed away in his family home on February 9, 2019, due to natural causes. His passing comes just three weeks after older brother Lionel Whigham who passed away and his mother Veola Johnson June 17, 2017. Darnell is survived by his two daughters: Antionette Davis (Armond) and Lisa Johnson; two granddaughters: Adelyn and Abigail Davis; his aunts: Lula Whigham-Marable, and Dorothy Love; his brothers: Thomas Whigham, Gregory Whigham, and Ahmin Walker; and a host of nieces, nephews, and friends.

The family of Darnell Johnson created this Life Tributes page to make it easy to share your memories.