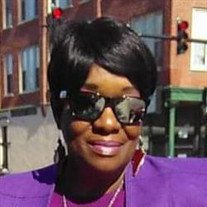 Ms. Deborah “Grand” daughter of Edyth Gary-Gamble and Anthony “Tony” Beasley was born September 28, 1944 in Chicago, Illinois. Deborah was one of two children to bless their union. Deborah got the name “Grand” for always being real and never sugar coating anything. Deborah met the love of her life Douglas Jamerson and they were happily married for many years. She loved being a wife and mother to her eight children. But nothing made her happier than being a grandmother and a great grandmother. Deborah was a real “G-Ma”. Always kept it 100 Grand. Grand worked as a typesetter at Sorg Printing Company for over 20 years until she went into early retirement around 1984/1985. Deborah loved the Lord. She explored various different religions over her journey through life, Catholicism, Buddhism and Muslim to name a few. In her later years she settled into True Vine Church where she was an active member. Grand enjoyed music of all sorts, especially jazz, gospel and Dusties. She loved to dance and sing, although she knew she couldn’t hold a tune. It was no secret that Grand yearned to be with the Lord and after a brief illness she made her transition on May 1, 2018. She was preceded in death by her husband Douglas and one son Rasean Jamerson. Deborah “Grand” Jamerson will live forever in the hearts of her family, brother Brian Beasley; children Edyth Beasley, Donna Jamerson, Preston Jamerson, Anthony Jamerson, Phyllis Jamerson, Leon Elliot and Deborah “Omega” Jamerson; 23 grandchildren, Erica, Maria, Lamonica, Ashlee, Ebony, August, Ayana, Rebekah, April, Maranda, Teccora, Damien, Toni, Chance, Raseanda, Rasean Jr., Anthony Jr., Cassandra, Byron, Tyresha, Antwan, Asiah and Demetrius; several great grandchildren; and a host of other relatives and friends too numerous to mention.

The family of Deborah Jamerson created this Life Tributes page to make it easy to share your memories.

Send flowers to the Jamerson family.