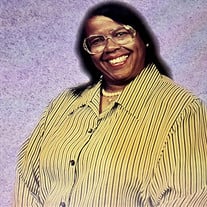 Delano Ann Pointer-Raasch, also known as Dee, was born June 14, 1945, to the late Theodore and Inez Williams-Smith at Provident Hospital in Chicago, Illinois. Delano was one of 8 children to this union. As a youth she attended Robert S. Abbott Elementary School on the southside of Chicago, later transferring to Parkside Academy and graduating to Emil G. Hirsch High School. As she continued her journey through life, Delano and Clyde met at a young age and united in Holy Matrimony in October of 1961, in Chicago, IL, and to the this union they were blessed to have three beautiful children, Alice, Clyde Jr, and William. Delano was saved by Christ and was a true believer in God. She held her spirituality close to her heart with great humility. She was also a humanitarian, caring for those less fortunate than herself. She never expected anything in return except gratitude. She had a great sense of humor and cared deeply for her children and family, there was nothing she wouldn’t do for them. After many years later, Delano would remarry Jerry Raasch who preceded her in death. Delano began her work history in 1965, at the kitchen of Sara Lee Bakery in Deerfield, Illinois, where she was a loyal and avid line inspector, respected by her coworkers and appreciated by the staff for her dependability and a great work ethics. After leaving the kitchen of Sara Lee, she was employed by Soft Sheen Products in Chicago, Illinois. During her time of employment, Soft Sheen moved to Kentucky, and she was offered to continue at the new location, and she gladly accepted it. She worked there which was then renamed L’Oreal until her retirement in which she then moved back to Chicago to enjoy her freedom from the workplace. Delano had loads friends, but her real “Posse” were her fishing buddies and her Furr baby “KILLA”. Fishing was her passion and her place of peace. On most days you would find her on the banks of the lake. She also loved camping and traveling in her RV with her family making many road trips, creating joyous memorable memories. She loved being on the road, she loved cooking out and she loved photography. Delano made her transition on January 21, 2022, and she is survived by her two children, Alice Jean Pointer and Clyde Edward Pointer Jr. (Linda); and her bonus son Robert (POPPA JOE); seven grandchildren Anton, Xavier, Lasandra, Tasha, Clyde III, William Jr., and J’allayha Okela; five great-grandchildren Jalia, Xavier, Allyson, Malik, and Preston; two sisters Ola Jones and Belinda Young; two brothers Theodore Smith and Katibu Maduka; a special niece, Kim West; and a host a family and close friends. Delano is preceded in death by Clyde Pointer Sr, (spouse), Jerry Raasch (spouse;) one son William Darryl Pointer (Lakema Pointer); two sisters Justine Elizabeth Gains and Maxine Evelyn Thorpe; one brother Charles Townshend; five nephews John Smith, Robert Smith, Rodrick Smith, Anthony Thorpe, and Theodore Smith Jr., preceded as well, as her previous Furr baby KILLA.

Delano Ann Pointer-Raasch, also known as Dee, was born June 14, 1945, to the late Theodore and Inez Williams-Smith at Provident Hospital in Chicago, Illinois. Delano was one of 8 children to this union. As a youth she attended Robert S. Abbott... View Obituary & Service Information

The family of Ms. Delano Ann Pointer-Raasch created this Life Tributes page to make it easy to share your memories.

Send flowers to the Pointer-Raasch family.