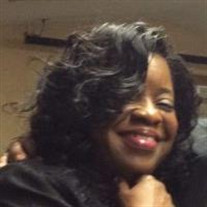 Desiree Lavenia Harris was born September 3, 1956 in Lumberton, Mississippi to the union of Lillie Hurst and William Rogers. After moving to Chicago, Desiree attended school. This equipped her to hold a variety of jobs such as selling vacuums for Oreck, home healthcare and even factory work. Later, she extended her skills by running her own cleaning service and selling MaryKay and Avon as a cosmetics specialist. But one of the most important jobs she had was raising and loving her three sons, Reginald Devon Rogers, Angelo Rogers and Clarence Wheeler, Jr. She loved and cherished them very much. Desiree was a very loving, compassionate and generous person. She would give to anyone she knew who was in need. She was always looking for ways to help anyone she could. She had a beautiful personality. She LOVED music. Play the right song….and you would often find Desiree steppin’ on the dance floor. On March 5, 1977, Desiree showed the greatest love that anyone can show by dedicating her life to become one of Jehovah’s Witnesses. She served faithfully for 42 years, at one point as a regular pioneer, spending countless hours dedicatedly teaching others about the God she loved so dearly. On February 2, 2011, Desiree married Terry Harris. One of Desiree’s most valuable qualities was her endurance. She was preceded in death by her son, Angelo Rogers, her father, William Rogers, her first husband, Clarence Wheeler Sr., her second husband, James Howell, two grand-daughters, Jaquetta Antonette Rogers and Laven Rogers and great-granddaughter, Royalty Blue McCarthy Rogers. However, her faith in Jehovah God and belief in his promise that death will done away with (Rev 21: 3, 4) (John 5:28, 29) kept her faithfully serving Jehovah. Desiree fell asleep in death on August 26, 2019 with her husband and her sons by her side. Desiree leaves to cherish her memory her supportive husband, Terry, a loving mother, Lillie Hurst, two wonderful sons, Reginald and Clarence Jr., her caring brother, Stan Rogers, her grandchildren Sharraya Angel Rogers, Antwonicqua Shantel Rogers, Reginald Devon Rogers Jr., Redgrick Jevon Rogers and Tiyuan Deontaz McDaniel Rogers, 14 great-grandchildren and a host of other relatives and friends. May we keep in our hearts a Wife, Daughter, Mother, Grandmother, Sister and Friend, Desiree.

Desiree Lavenia Harris was born September 3, 1956 in Lumberton, Mississippi to the union of Lillie Hurst and William Rogers. After moving to Chicago, Desiree attended school. This equipped her to hold a variety of jobs such as selling vacuums... View Obituary & Service Information

The family of Desiree Lavenia Harris created this Life Tributes page to make it easy to share your memories.