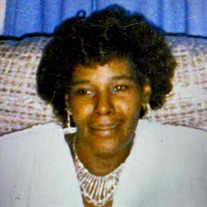 Diane was born on July 18, 1945 in Chicago, Illinois to Clarence and Mildred Bolden. She grew up in Robbins, IL where she attended Dwight D. Eisenhower High School in Blue Island, IL. Diane married her high school sweetheart King E. Bartee and raised their 3 children in Robbins, IL. She was an active member of her parish, St. Peter Claver, in Robbins IL where she served in different auxiliaries. Diane was committed to her family and enjoyed the time she spent with her children and grandchildren. Diane loved to garden, play games and read. She was active in her community and volunteered often at her senior facility. Diane worked in the medical field, where she built her career. She began her career at Oak Forest Hospital and retired from Methodist Hospital, after which she started her own business, Diane’s Cleaning Service and worked in various aspects of real estate. Diane M. Bartee was granted her angel wings on December 2, 2020, with her family by her side in Tinley Park, IL. Diane was preceded in death by her parents, Clarence and Mildred Bolden, her brother Norman Bolden and her sisters Barbara “Bobby” Douglas, and Sandra “Suggie” Bolden. Diane leaves to cherish her memory, her sons, Clarence E. Bartee and Kevin Bartee (LaVerne); her daughter Kimberly Ann Bartee-Shelton; her sister Janice Burns; her brother Ronald Bolden (Bernice); her grands Dominique, Bryan (Taylor), Corey, Charles, Grace and Faith; her great grand Josephine; and a host of nieces, nephews, cousins and friends.

The family of Diane Bartee created this Life Tributes page to make it easy to share your memories.

Send flowers to the Bartee family.