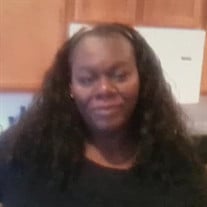 Diane Regina Williams Watson was born on July 2, 1970 to Elder Mother Katie Mae Shelton and the late Leon Williams. Diane grew up strong willed and free hearted. Growing up in the church Diane asked God the father to come into her life at an early age, and accepted Christ once again as an adult. A very loving daughter and mother of three, she would always speak her mind and defend her opinion. Keeping close connection with her mother she remained with her eyes on Christ, continually trying to stay on the right path till the very end. Diane was very successful at each job she worked. She loved all the great friends she made as well as all of those she would refer to as her family, South Star Services, Wal-Mart and all those before and in between. Diane received her Christian training as a young girl from Holy Ghost Deliverance Center with Elder L.T. Hutton. Then later officially joining under the leadership of Bishop Gregory St. James Dillard on November 21, 2004, Pentecostal Church of Christ For All Nations; after being a special visitor for over 10 years. Loving to be a part of Bible Class and often seen by the younger students as a cool saint; Diane worked in Sunday School and Bible Class as a teacher as well as a teacher aide. After uniting in marriage to Tawala Watson in 1991, Diane birthed her second earthly love and daughter Deanna Ebonee Watson. Later, she met Jacque Jackson, Sr. and gave birth to the young man of her dreams and her son, Antonio Jacquez Jackson. Diane wanted only to raise her family in the best way she knew how; by encouraging them to be strong and to trust the work of our Lord and Savior Jesus Christ. Diane was proceeded in death by her daughter, little Katie Charon Williams; two brothers, Ozzie Isom and Antonio (Shabba) Williams; father, Leon Williams; grandmother, Earline Rogers; great-grandmother, Willie Mae Freeze; grandfather, Moses Rogers Sr.; aunt, Mary Ann Walker; great aunt, Lila (Grandma Haya) Paden; sister, Paulette Williams; uncle, Freddie Rogers; cousins, Sister Dorothy Neal and Maurice Washington; and her Godly sister and best friend, Cathy Dunn. She leaves us all to cherish those memories she made with us throughout her life - two daughters, Deanna Watson and Leandriea Striblin; three sons, Antonio Jackson, Jacque and Joseph Striblin; two grandsons, Maurice Demetrius Lemar Watson and Kamari Kilroy Jones; her faithful mother, Katie M. Shelton; two sisters, Bobby Jean (Booker) Wilson; Karen Denise (Andre) Agnew; seven brothers, Eugene Brooks, David Brooks, Anthony Williams, Johnny Brooks, Mark Isom, Leon and Joe Williams; two sisters/besties, Andrea Boler and Sharnetta Griffin; and a host of aunts, uncles, cousins and friends.

Diane Regina Williams Watson was born on July 2, 1970 to Elder Mother Katie Mae Shelton and the late Leon Williams. Diane grew up strong willed and free hearted. Growing up in the church Diane asked God the father to come into her life at an... View Obituary & Service Information

The family of Diane Regina Williams-Watson created this Life Tributes page to make it easy to share your memories.

Send flowers to the Williams-Watson family.