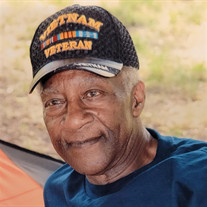 Donald Easte was born in Sherman Heights, Birmingham, Alabama on January 4, 1948 to Ada Belle Easte and Herbert McDaniel Sr., of Birmingham, Alabama and later graduated from Western Olin High School. In 1965, Donald moved to Chicago, IL, started working for Northwestern University (where he worked for 50 years until his death), and was drafted into the Vietnam War (he was officially and honorably discharged from military service in 1973). Donald met Adriane on a blind date in 1982 and the two were inseparable until his passing. Donald, also known as Don, Railhead, and Farmer Brown to those who knew and loved him, found joy in the simple things in life. He loved life and enjoyed the company of family and friends, archery, baseball, football, carpentry, bowling, riding his bike, yard work, and he developed a brotherhood with his lifelong friend from Alabama Jimmy Durr and his work buddy Ed Button whom never forgot his birthdays. Don was not big on being in the spotlight and cultivated a relationship with nature that included sitting by the lake with his friend Jimmy Durr, going golfing with his friend Ed Button, or just sitting in his back yard barefoot listening to music. Donald was preceded in death by his parents Ada Belle Easte and Herbert McDaniel Sr., and his sister Brenda Shahid. He departed on May 17, 2021, surrounded with love from his wife, daughter, his grandnieces, and grandnephew. He departed with peace in his heart living life the way he wanted, as he always quoted, “I make the rules here today”. Donald leaves to cherish his memory with his Wife: Adriane Easte Sr., Daughter: Adriane Easte Jr., Uncles: Whatley (Susie) McDaniel and Wesley McDaniel, Brothers: Herbert (Lisa) Rashada, Charles (Henrietta) McDaniel, and Tyrone (Kathy) McDaniel, Sisters: Barbara Celestin and Sharon McDaniel-Miller, Grandnieces: Vernisha and Denise Cummings, Grandnephew: Vernon Cummings Jr., Relatives of the following families: Brantley, Brown, Cummings, Dillard, Foster, Harris, McDaniel, Northwestern University, Shahid, Smith, Tisdale, Turner, Woods, and a host of nieces, nephews, cousins, friends, and neighbors.

The family of Mr. Donald Easte created this Life Tributes page to make it easy to share your memories.

Send flowers to the Easte family.