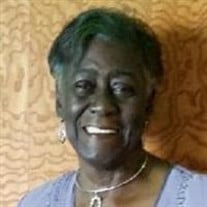 Dora was born October 15, 1941 in Goodman, Mississippi to Annie and Frank Walters. Dora was the third of twelve children. Dora began her education at Spring Ridge Elementary School in Goodman, Mississippi and she completed high school at Tipton Street High School in Kosciusko, Mississippi. Dora’s Christian journey began at an early age at Spring Ridge Methodist Church in Goodman, Mississippi under the spiritual leadership of the Late Pastor Snowball. Shortly after completing high school in 1958, Dora moved to Detroit, Michigan where she studied business training until the early 1960’s. Because of a strong desire to be near her siblings and family members, she later relocated to Chicago, Illinois where she met her husband MacArthur Vaughn, Sr. Dora and MacArthur were united in holy matrimony on March 17, 1965. This union was blessed with three children: MacArthur, Jr., Karen, and Arlena. Dora and MacArthur enjoyed fishing, cooking, and traveling together. As her spiritual walk developed with God, Dora united with The King David Missionary Baptist Church under the leadership of the late Reverend Clarence Guyton, Pastor, and beloved uncle. As Dora continued her Christian walk, she united with the Power of Praise Non-Denominational Ministry under the leadership of Apostle Tyrone Thomas, September 22, 2013, where her children and grandchildren worship. While a member of Power of Praise Non-Denominational Ministry, she became a very active member of her church congregation. Showing leadership in her church, she was soon asked to serve on the Mother’s Board. Serving on the Mother’s Board was a passion of Dora’s. Because of her work on the Mother’s Board, church activities and her willingness to work, she was then appointed to serve as President of the Mother’s Board in November of 2018. She fulfilled her duties as Head Mother of the ministry until the Lord called her home to be at rest with Him. Dora was preceded in death by her mother Annie Meg Walters, her father Frank Walters, her sister Frankie Jean Walters, her brother Earl Walters, and her daughter Sharon Walters. Her beautiful life will forever be cherished in the lives of her husband: MacArthur Vaughn, Sr.; three children: MacArthur Vaughn, Jr. (Delores), Karen Vaughn and Arlena Smith (Robert); nine siblings: Annie Dillard, Jerry Walters, James Roy Walters (Jean), Perry Walters, Bonnie Pritchett (James), Bobbie Walters, Eddie Walters (Carolyn), Lue Arthur Walters (JoAnn) and Bettye Walters; two granddaughters: Shaquita Watson-Hampton and Christine Smith; eight grandsons: MacArthur Vaughn, III, Maurice Vaughn, Marcus Vaughn, Antonio Vaughn (Zakiya), Delano Vaughn (Latoya), Malcolm Smith, Marshaun Smith and Lonnie Smith; one sister-in-law; three brothers-in-law, eighteen great grandchildren; a host of devoted nieces, nephews, cousins, and friends.

The family of Dora Vaughn created this Life Tributes page to make it easy to share your memories.

Send flowers to the Vaughn family.