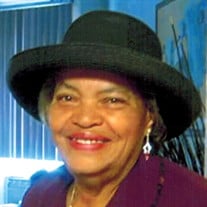 Dr. Dorothy Branch Holley-Turner was born in Burdette, Arkansas on April 23, 1932 to Amanda Clark and Thaddeus Branch. Dorothy was the fourth daughter and the fifth child of 12 siblings. Dr. Dorothy accepted Christ as her Lord and Savior at an early age. Her early education was in Arkansas and Oakland, California. When Dorothy was a young lady her family moved to Chicago, Illinois, where she was an honor student at Wendell Phillips High School. Later, Dorothy obtained her Bachelor of Arts degree from Roosevelt University in 1972. In 1974, she earned her Masters in Art and Social Service Administration from the University of Chicago. In 1998, she received her Doctorate of Education from Faith-Grant College in Birmingham, Alabama. Dr. Dorothy held many prestigious positions. Some highlights are: Director of Abraham Lincoln Center, Child Welfare Program; Director of Urban League Infant Mortality Program: Director of Social Services for the City of Chicago, appointed by Mayor Richard Daley; and Director of Training for Children and Family Services for the State of Illinois. She was appointed by three governors of Illinois to serve on the Infant Mortality Reduction Advisory Board. Dr. Dorothy received numerous awards and honors from her long life of service to humanity. One of Dr. Dorothy‘s most special honors was an Induction into the Wendell Phillips Hall of Fame. Other awards include: The Universal Negro Improvement Association, Chicago Chapter Award; the University of Chicago Black Alumni Award; SASI (Substance-Abuse Board of Directors); and the Service Award from the 32nd District Office of the State of Illinois, 92nd General Assembly. Dr. Dorothy‘s crowning achievement was the 2016 Lifetime Achievement Award from the National Association of Black Social Workers and Convention in New Orleans, Louisiana. Dr. Dorothy Holley met and united in holy matrimony, with Dr. Charles Turner, her beloved husband of 22 years. Together they traveled, laughed, and shared many precious memories in their loving relationship as true soulmates. Dr. Holley-Turner lived a long, happy life, filled with laughter, love and service to her family, friends, colleagues, and neighbors. She loved children and dedicated her life to making the world a better place, where each child can live and learn completely safe and secure in their environment. Dorothy departed this life on March 26, 2019, at the age of 87 years old. She was preceded in death by her parents Amanda and Thaddeus; and six siblings Eupha Lee, Louise, Mary, Mildred, Edna Jean, and Thaddeus Jr. Dr. Dorothy Holley-Turner leaves to cherish her memories, her husband Dr. Charles Turner; two sisters Vera Cashew and Irma Marie (Michael Aguillard); sister-in-law Christine Branch; stepdaughter Camille; grandson Dr. Alex Vega; two step grandsons London and Daniel Vega; special daughter Rosalind Lewis; and a host of nieces, nephews, other relatives, and friends.

Dr. Dorothy Branch Holley-Turner was born in Burdette, Arkansas on April 23, 1932 to Amanda Clark and Thaddeus Branch. Dorothy was the fourth daughter and the fifth child of 12 siblings. Dr. Dorothy accepted Christ as her Lord and Savior at... View Obituary & Service Information

The family of Dr. Dorothy Holley-Turner created this Life Tributes page to make it easy to share your memories.

Send flowers to the Holley-Turner family.