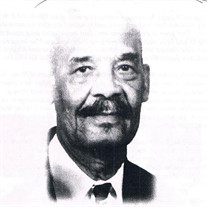 Earl Sudduth was born on November 29, 1929, to Dave and Viola Sudduth in Kosciusko, Mississippi. Earl received his formal education as he grew up in Kosciusko. After school, Earl joined the United States Army. Once he was discharged from the Army, he moved to Chicago, Illinois. While in Chicago, he met and married the love of his life, Katie P. Walker. They honored their wedding vows and remained together for more than 60 years. They grew to truly become one. Earl would often brag about how long he had been married and everyone knew how much he loved his wife. They were blessed with two children - Cassandra Kaye and Roderick Earl. As a father, he made sure new acquaintances knew his children. To provide for his family, Earl worked a number of years at Roma Wire Company, where he developed his skill as a welder. After the company closed, he began work at the Acme Steel Mill. He remained there a number of years until his retirement. Earl had too much energy to sit around the house and enjoy retirement, so he purchased a riding lawn mower. He began cutting grass because he said he liked it and later did it for hire. Bro. Sudduth had always been conscious of his and his family’s spiritual needs early on taking them to church. On July 3, 1993, Earl symbolized his dedication to Jehovah by means of water baptism becoming one of Jehovah’s Witnesses. He served faithfully as an appointed Ministerial Servant and spent countless hours in the field ministry and caring for his congregational responsibilities until his health did not allow him. Even then, he would dial in on the phone tie-in line and listen to the meetings. During his illness there were a group of relatives and friends that became what we called “his support team". They helped to make sure Earl had everything he wanted and needed. On May 17, 2019, Bro. Sudduth fell asleep in death. He was preceded in death by his parents Dave and Viola Sudduth; one grandson Jason Cole; two sisters, one brother. Bro. Earl Sudduth leaves loved ones years of memories to cherish, his wife, Katie P. Sudduth; two children, Cassandra (Lonnie) Pharrow and Roderick (April) Sudduth; two grandchildren, Marshall Burns and Taylor Brooks; one sister, Azell McMillan; one sister-in-law, Rose Sudduth; one brother-in-Law, Willie (Vera) Walker; and a number of nieces, nephews, cousins and friends.

Earl Sudduth was born on November 29, 1929, to Dave and Viola Sudduth in Kosciusko, Mississippi. Earl received his formal education as he grew up in Kosciusko. After school, Earl joined the United States Army. Once he was discharged from the... View Obituary & Service Information

The family of Earl Sudduth created this Life Tributes page to make it easy to share your memories.

Send flowers to the Sudduth family.