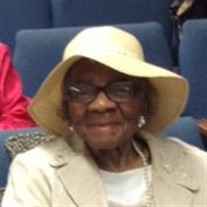 Edith Redeaux was born in Chicago, Illinois on May 16, 1924. She was the older of two children born to Lonnie and Edna Berry. Edith was preceded in death by her husband of 64 years, Paul Redeaux, her father and mother Lonnie & Edna Berry, her younger brother, Edward Berry, her eldest son Anthony Redeaux and her youngest son Donald Redeaux. ​In 1941, Edith graduated from Phillips High School in Chicago. In 1948, Edith married childhood friend, Paul Redeaux. From that union came nine children, seven sons and two daughters. Edith was the consummate, nurturing mother to her nine children, giving each one of them her loving, individual attention. ​The year 1959, proved to be a major turning point in the life of Sister Edith Redeaux. In that year she met Sister Helen Lavizzo (Kendrick) in the door to door preaching work of Jehovah’s Witnesses. Edith accepted a free home Bible Study on that day and began a careful, systematic look into the Word of God. Later, as a result, everyone in her family would be affected by the profound truths being revealed from God’s Word. ​Edith’s firstborn child Paula, was the first to accept these Bible truths and later symbolize her dedication to Jehovah by being baptized in 1968. She was followed by her brother, Robert Redeaux, who together with his wife Glennye, were baptized in 1971. Next, brother David Redeaux and his wife Yvonne were baptized in 1981. Following them, brother Melvin Redeaux and his wife Yvonne were baptized later in 1981. Still later, sister Pamela Walker was baptized also, in 1981. Finally, last but not least, Sister Edith Redeaux, dedicated her life to Jehovah and got baptized in 1988. ​Edith was truly blessed to have two faithful biological daughters, in Paula Redeaux and Pam Walker. As age began to take its toll on Edith, these faithful daughters, throughout the years, shopped, cooked, cleaned house, chauffeured, prepared meals and provided loving companionship, so that mom never felt alone or abandoned. Further, Edith enjoyed the blessings of a third faithful, spiritual-daughter, her daughter-in-law, Glennye Redeaux, who worked with the family to consistently provide for mom’s needs. Robert and Glennye had the privilege of bringing mom into their home, where Glennye was a loving and tireless caregiver for nearly three years. All three of these loving daughters served to help make sure that mom always had what she needed. Notably, all three continue to serve in the full-time ministry. ​Edith sons were also supportive with weekly visits where scriptural encouragement and heartfelt prayer would serve to lift her spirits. Often after being spiritually refreshed, Edith would call for a good game of checkers. And while Pam, Rob and Brother Albert Johnson would always manage to let mom win a few games, Paula, on the other hand, would often give her a lesson in tough love, winning most of the matches. ​Mom Redeaux was always appreciative when her sons Robert, David, Sherman, Melvin and Ronald, along with their wives, Glennye, Yvonne D, and Yvonne M, took the time from their busy schedules to offer cards, gifts, food, phone calls or visits, in order to encourage her. Also, the grandchildren and great grandchildren were a source of encouragement when coming to visit her as well. Commendably, April, Quiana, Michelle, Monique, Maurice, Maximus, Aurelius, Isis and Silas would come by and show loving concern. Mom always enjoyed the weekend leg massages that she received during her stay with Rob and Glennye, courtesy of granddaughter April. ​In closing, we are happy to say, that despite a multitude of illnesses, with Paula’s help, Sister Edith Redeaux remained an active publisher of the good news, reporting field-service-time right up until the month before she fell asleep in death on Thursday, July 19, 2018. And though Jehovah blessed her with special mightiness to see the age of ninety-four, she will nevertheless, be sorely missed by her loving family and her loving Bronzeville congregation, as well as many, many other dear friends. How sweet it will be to embrace her once again in Paradise. ​Sister Edith Redeaux, leaves to cherish her precious memory, two loving daughters, Paula Redeaux and Pamela (Edwin) Walker; five loving sons, Robert (Glennye) Redeaux, Sherman Redeaux, David (Yvonne) Redeaux, Melvin (Yvonne) Redeaux and Ronald Redeaux, her only niece, Rhonda Berry; her granddaughters, April, Michelle, Monique, Quiana, Lakeisha, Contesa and Alexis; her grandsons, Anthony Jr, Terrance, Dorian, Shawn, Sherman Jr., Maurice, Martez, Michael, Nathan, Ronald Jr., Dietrich and Donald; along with great grandsons & great granddaughters, and a host of loving friends. The family would like to acknowledge the special encouragement given to Edith by the following friends: Beatrice Anderson, Lillian Sydnor, AB Jones, Dorothy Neal, Albert Johnson, James Jackson and Myrtis Jones.

Edith Redeaux was born in Chicago, Illinois on May 16, 1924. She was the older of two children born to Lonnie and Edna Berry. Edith was preceded in death by her husband of 64 years, Paul Redeaux, her father and mother Lonnie & Edna Berry, her... View Obituary & Service Information

The family of Edith L. Redeaux created this Life Tributes page to make it easy to share your memories.

Send flowers to the Redeaux family.