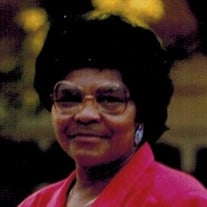 Elenor Chavers was born March 7, 1935, in Blytheville, Arkansas. She was raised by Lucille Rockette and Robert Williams Sr. Elenor lived in Arkansas for many years before settling in Markham, Illinois. Elenor attend St. Bethel Baptist Church in Chicago Heights, Illinois, where she served as an Usher for many years. In 1992, Eddie and Elenor joined hands in marriage. To this union they had a bouncing little girl they named Lucille. Janet was so happy that she now had a little sister, along with her older brother Daniel. Elenor was always a woman of class, where you would find her wearing her exquisite diamonds and fine clothes. Elenor never met a stranger; you would find her laughing and talking with people in the line at the grocery store or at the salon just getting her hair done. Her infectious sound of her voice was next to none. Elenor worked at Borg Warner for over 30 years, along with her oldest daughter Janet. When Elenor found out that there were openings, she asked Janet, “Do you want me to get you in at Borg Warner?” Janet said, “Well, uh, I guess mom, if you want me to work with you “EVERYDAY!”” Elenor did just that and they worked together until Elenor retired and Janet continued to work at Borg Warner until they closed. Elenor was Lucille’s idol; she always wanted to dress and ride in topflight cars just like her mom. When Elenor would go to work, Lucille would go and try on her mom’s clothes, then she would go and sit in “one” of Elenor’s cars to be just like her. Elenor thought the world of her oldest son Daniel. He always told Elenor he was the man of the house She said oh okay, “well the man of the house pays the bills, cuts the grass, and shovel the snow.” Daniel then said, “Mom I am too young for all that, I am just playing I am not the man of the house, I am the son of the house.” Elenor and her friends would get together once a month just to bond. When they would come over, Eddie her husband, would say, “I’ll be back, you all laugh too much.” Love and laughter did fill the Chavers home when they were there. The sun set for Elenor Chavers at the age of 86, on Sunday, January 16, 2022. She will be joining her beloved husband Eddie Chavers who preceded her in death in 2013. Her sisters Vernita, Vanessa, Venis, and Robin; her brothers Larry, Robert Jr., James, Levy, and Opry all preceded her in death. In celebrating her life, she leaves to cherish her memories and legacies, her children Daniel Isby of Markham, IL, Janet Brodanex (Curtiss) of Country Club Hills, IL, and Lucille Williams of Matteson, IL; 15 grandchildren; and a host of great grandchildren, nieces, nephews, other relatives, and friends. Elenor held a special part of heart for Derrick Russell who was untiringly were there for her until she made her transition.

The family of Mrs. Elenor Williams-Chavers created this Life Tributes page to make it easy to share your memories.

Send flowers to the Williams-Chavers family.