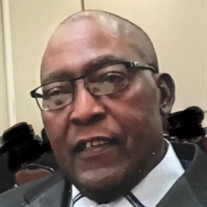 Elige Gennie Jr. was born March 21, 1955 in Gunnerson, Mississippi to Elijah and Tommy Lou Gennie. He was one of several children to bless their union. Elige received his formal education in Mississippi. As a young man Elige moved to Chicago, Illinois to make a better life for himself. He met Katherine Goings, and on July 2, 1983, they married, and proved to be a three-fold cord not easily broken. Katherine and Elige truly loved each other. He set a fine example of what a great husband and father should be. Family road trips, included driving, fishing, and meeting up with other family. Fishing lessons turned into life lessons on being a man, having a family, and the knowledge of Jehovah being instilled in his four sons. Katherine would read the Bible aloud to Elige as he fished and told him that one day he would become a fisher of men. Elige began studying the Bible with Jehovah’s Witnesses. He enjoyed telling others how his wife Katherine’s fine Christian example in the home led him dedicating his life to Jehovah and symbolize his dedication through water baptism on April 18, 2009. He loved telling others about the truth of God’s word the Bible and especially showing them from the Bible God’s name Jehovah and the hope for the dead. Elige life revolved around his service to Jehovah, his favorite things were working in field service and studying the Bible with his wife. He served as a Ministerial Servant in the Woodmar congregation and enjoyed showing his love for Jehovah and the congregation. As Elige’s health failed his family rallied around to care for him. His wife Katherine always staying faithfully by his side, spending the night at the hospital and caring for his personal needs. On December 10, 2018, Elige Gennie Jr. fell asleep in death. He was preceded in death by his mother Tommy Lou Gennie and one son LaTroy. Elige will be deeply missed by his wife Katherine; three sons Elijah (April) III, Winston (Denise), and Antoine; grandchildren Antoinette, Antoine Jr., Elijah IIII, and Antiono; father Elijah Sr.; sisters-in-law Doris (Sammy) Lowery and Dorothy Goings; siblings LuLa, Pauline, Mary, Clementine, Jesse, Wille, Alvin, Gregory, Michael, and Jessie; cousins Ernestine Kidd and Alberta Hall; and a host of family and friends too numerous to mention.

Elige Gennie Jr. was born March 21, 1955 in Gunnerson, Mississippi to Elijah and Tommy Lou Gennie. He was one of several children to bless their union. Elige received his formal education in Mississippi. As a young man Elige moved to Chicago,... View Obituary & Service Information

The family of Elige Gennie Jr. created this Life Tributes page to make it easy to share your memories.

Send flowers to the Gennie family.