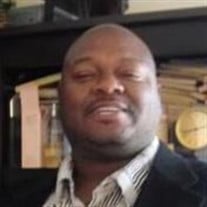 Elton Lee Buie Jr., also known as Mike Jeter, age 54, passed away unexpectedly, Wednesday, March 3rd, 2021. He was born August 22, 1966 in Chicago, Illinois. Mike was the eldest son of Diane (deceased), Elton Lee Buie Sr. (deceased) and Willie Jeter (step father of 52 years). His siblings include Lena “Tina”, Melvin “Dino” (Alicia), Melinda (Rob), Dennis, Annette (Patrick), Jared (Selena), and Chelena “Dana” (Landon). Mike had a passion for cars and was gifted with an ability to fix any issue. This led to being self-employed as an Auto Mechanic. It was a source of pride that he could take something mangled or damaged, make it new and make it look right again as a result of his skill. Mike also had a deep love for his family and friends. His “old school” style of parenting mixed giving his kids a hard time with having a soft heart and always being there for them. He was a dependable brother and friend as well. Mike would always help others, a skill he learned from his mother. If you had car issues he was there to help, if you needed money or wanted to socialize, he was there. Mike also loved to cook, many days of summer was spent in front of the BBQ grill, around his loved ones as he laughed and made jokes. Mike had 5 kids in total Elton Lee Buie III (deceased), Demarcus Buie, Alicia Buie, Beyoncé Buie and Ka’Nyla Boyles. In addition to his kids, Mike is survived by his grandchildren and nieces and nephews. All of which he loved dearly.

The family of Elton Buie Jr. created this Life Tributes page to make it easy to share your memories.

Send flowers to the Buie family.