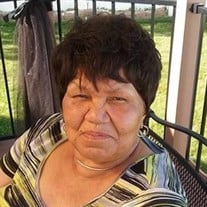 Essie Lee Dulaney was born December 24, 1930 in Thornton, Mississippi to her mother Rosie Watson Dulaney and father Venguan Dulaney, Sr. (who preceded her in death). Through this union, Essie was the youngest of five children, Jessie Mae Robinson, John Dulaney, Gladys Dulaney-Davis, and Matthew Dulaney, (who preceded her in death). Venguan Dulaney, Sr. later married Dollie Geneva Walton in 1943 and had ten children to their union. Of them, her brother, Venguan Dulaney, Jr. preceded her in death. Essie also had two brothers and one sister, Robert Lee, Freddie Lee and Betty Dulaney (who preceded her in death). On April 17, 1949, Essie married the love of her life, Eddie Randle, Jr. (who preceded her in death). Their marriage of 48 years produced six children. Essie and Eddie moved to Chicago in 1951 to raise their family. Essie worked at various companies, but settled her career as a cook for Venture Stores. She retired in 1992. Essie dedicated her life to Jehovah on February 17, 2002. She attended the Fernwood Congregation of Jehovah’s Witnesses, and was a faithful servant and publisher of the good news up until her death. Essie will be remembered as our “Gold”. She took pride in her family and loved to cook large feasts for all to gather. Not only was she a great cook, Essie enjoyed growing her vegetable garden, picking grapes and apples from the orchard and making the best preserves, pies, and cobblers. She also loved to make homemade ice cream and cakes were her specialty. Essie always spoke the truth, even when it hurt. Her compassion for others will live on for generations to come. Essie leaves to cherish her memories with six children, Maryann, Eugene, Ronnie (Jocelyn), Kenny (Regina), Sandra (Arnold), and Daniel (Veronica); thirteen grandchildren Vernita (Ronald), Torrae, Lytrice (Martese), Kenny Jr., Jwan (Ebony), Maurice, David, Jose, Alisha, Eddie, Joey (Tracy), Jasmine (Charlie), Daniel Jr.; a host of great-grandchildren and one great-great grandchild; nine brothers and sisters Katherine (John), Gloria (Ollie-Deceased), Bobby Lee (Cynthia), Larry, Mary, Chester (Sandra), Lillie, Bonnette, Nikki (Billy); and a host of nieces, nephews, cousins, relatives and friends.

Essie Lee Dulaney was born December 24, 1930 in Thornton, Mississippi to her mother Rosie Watson Dulaney and father Venguan Dulaney, Sr. (who preceded her in death). Through this union, Essie was the youngest of five children, Jessie Mae Robinson,... View Obituary & Service Information

The family of Essie Lee Randle created this Life Tributes page to make it easy to share your memories.

Send flowers to the Randle family.