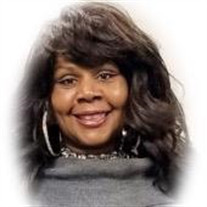 Esther Caldwell was born to Bennie and Theresa Caldwell in Chicago, Illinois, on April 4th, 1953. She was the 4th of 6 children. Esther attended Medill Upper Grade Center and Simeon High School in Chicago, IL. She raised two sons at a young age, Kenneth Caldwell and Keith Caldwell. Esther was a great mother and spiritual instructor to her children. With the help of the Bible, she taught them how to read. Esther fell in love with singing at a very young age. She loved to sing for Jehovah. There's no denying the joy that singing brought to her heart. In October 1974, Esther married James Burton, and to this union, two children were born, Esther Elaine and James Maurice. Death ended this union in August, 1994. A young Esther was paying close attention when her mother would let the Jehovah's Witnesses into her home to study the Bible. Esther was keenly interested in attending the Kingdom Hall meetings with an older sibling. That's where her love for Bible truths grew. She would later begin letting the Witnesses into her own home to fully study the Bible. And on July, 22, 1977, Esther dedicated her life to Jehovah through water baptism. Esther was a warrior for the truth! Everywhere she went she was prepared to preach to anyone she came into contact with. Esther enjoyed the full time ministry. She was always looking to start a Bible study. Esther pioneered for Jehovah since 1992. She promised Jehovah that she was going to be the best pioneer that he ever had! Her zeal for preaching was evident to many. In October 2000, Esther married Dennis Howell. Both had attended Medill Upper Grade Center on Chicago’s Westside. The two actually sang in gamma school talent shows. She was quite, the star. It was at the Linblom Congregation that Dennis recognized Esther’s voice while singing a kingdom melody, at that he approached and introduced himself. Their friendship was rekindled and before long, they were married. Dennis and Esther shared a good life together. She was always fond of his whit and charm. The two of them continued to serve Jehovah and enjoyed the preaching work and Kingdom meetings together. She was able to assist many persons into the truth, with Jehovah’s help. One thing she always wanted to do was to preach where the Wild Beast was (at or in the facility of the United Nations). Dennis wanted to and promised to be by her side as she did so. Dennis often expressed his love for her in letters, poems, song, playfulness, and trying to see that she had everything she needed and asked for. Our dear mother, friend and loving sister, Esther Howell fell asleep in death on April 7, 2020, in Chicago, IL. We all look forward to welcoming her back to a Paradise earth! Esther was preceded in death by her parents, Bennie and Theresa, one sister Elaine, and two brothers, Aaron and Bennie, Jr. Esther leaves to cherish her memory, husband: Dennis Howell; children: Kenneth Caldwell (Demika), Keith Caldwell, Esther Burton and James Burton; sister: Theresa Goggins; brother: Tyrone Caldwell; mother-in-law: Beatrice Jones; brother-in-law: Glenn (Gwen); sister-in-law: Rita Howell; 5 grandchildren: Christopher Caldwell, Erik Caldwell, Elianna Burton, Kennedy Caldwell and Kaitlyn Caldwell; and a host of nieces, nephews, and friends.

Esther Caldwell was born to Bennie and Theresa Caldwell in Chicago, Illinois, on April 4th, 1953. She was the 4th of 6 children. Esther attended Medill Upper Grade Center and Simeon High School in Chicago, IL. She raised two sons at a young... View Obituary & Service Information

The family of Esther Howell created this Life Tributes page to make it easy to share your memories.

Esther Caldwell was born to Bennie and Theresa Caldwell in Chicago,...

Send flowers to the Howell family.