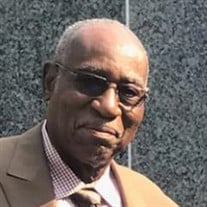 Eugene Beard was born on December 29th, 1947 in Somerville, Tennessee to the union of AC and Wille Mae Beard. Eugene was one of 13 children. Eugene graduated from Fayette Training School in 1966. He majored in auto mechanics. In 1968, he joined the Navy and was honorably discharged 1970. In the Navy, Eugene again added to his mechanical abilities by becoming classified as an engine mechanic. After his discharge he returned to his job at Interlake Steel Company (ACME), continuing his advancement to a Millwright. Eugene worked over 25 years in the steel mill industry, also having been employed at Allied Tube and Conduit. Eugene’s family moved back to Tennessee for a time and while there he was employed at John Wilder’s Youth Center and Arlington Developmental Center. In line with his mechanically inclined spirit, in 2003, Eugene became owner/operator of E & O Trucking. He did it all: driver, bookkeeper, maintenance man…. He did it all! On May 7th, 1973 Eugene’s enduring long-term relationship with Ophelia led to their marriage. The family took an interest in the Bible in 1978 which led to Eugene and Ophelia symbolizing their dedication to Jehovah on May 3rd, 1980 by water baptism becoming Jehovah’s Witnesses. Eugene was a loving, supportive husband, father and grandfather. In his service to Jehovah, he loved working with the RBC (LDC) building and repairing Kingdom Halls. He loved to fix things, especially cars. He was willing to share this knowledge with others showing patience and skill. If you called him, no matter the time, he ALWAYS gave of himself! There was also his fun side, he was always ready for a softball and volleyball game or bowling. His smile was contagious, smiling and happy even while he was sick. At the age of 73, Eugene Beard fell asleep in death on February 15th, 2021, at South Suburban Hospital, with his loving wife and son by his side. He bravely fought his illness with Jehovah’s help, remaining faithful in the issue of Universal Sovereignty to the end! He was preceded in death by his parents, AC and Wille Mae; daughter, Anissa and brothers, Johnnie B., Davis L., Robert L., Willie Curtis, William (Pete) and Roy Junior. Eugene is survived by his wife, Ophelia; sons, Damon and Wallace Mance; granddaughter, LaNeasha Durham; great-grandchildren, Destinee, Driemz, Don’de and Yahmoni; sisters, Mary Sims, Juanita Beard-Akailvi, Rosie M. Givhan, Evelyn Howard, and Marice Dandridge; brother Milton Beard: as well as a GREAT number of cousins, nieces and nephews, and friends.

Eugene Beard was born on December 29th, 1947 in Somerville, Tennessee to the union of AC and Wille Mae Beard. Eugene was one of 13 children. Eugene graduated from Fayette Training School in 1966. He majored in auto mechanics. In 1968, he... View Obituary & Service Information

The family of Eugene Beard created this Life Tributes page to make it easy to share your memories.

Eugene Beard was born on December 29th, 1947 in Somerville, Tennessee...

Send flowers to the Beard family.