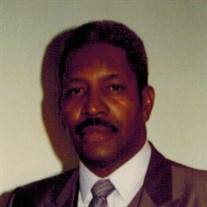 George T. Hunter “Bo” was born November 24, 1935, the youngest of eight children, born to Richard and Ada Hunter. As with any child, no one knew the gifts and qualities he would possess or the love he would spread to all he would meet. As a young man, George was an athlete. He attended Alexander High School and played football and basketball in school and graduated in May 1955. He worked with various companies in his lifetime. Duties such as a railroad worker, wiring lamps, manager of Sweet Heart Cup Corporation, laborer for the steel mill and retired in 2001 as a Maintenance Engineer. December 3, 1954, sixty-three years ago, George married the woman of his dreams, Evanell Mitchell. Let the record show of having the best husband any woman could ever have. From this union two children were born. George made one of the most important decisions of his life with the spiritual assistance of Clarence Logan and others in the Christian congregation. He dedicated his life by water baptism in August 1957, and became one of Jehovah's Witnesses. He enjoyed many privileges of service during his time as one of Jehovah’s Witness. He served as a “Presiding Overseer” which is currently called a “Chairman”. Additional services rendered were also Book Study Overseer and Public Talk Coordinator. At the Regional and Circuit Assembly’s he had the privilege of baptizing newly dedicated witnesses. George served as a Substitute Field Overseer. He also continued to serve as an Elder until his death. George cultivated his love for Jehovah and people through public speaking and teaching. The truth came alive with his creativity and fire for God’s word. He was a father to many and opened his heart and home to anyone in need. George wanted all to share his hope of everlasting life while living his journey on earth. George diagnosed with Renal Failure in 2003 until his death. George T. Hunter Sr. was preceded in death by his parents, Richard and Ada Hunter; four brothers, Ameal, James, Charles and Robert Hunter; and two sisters, Mary Hunter and Maude McClure. George leaves to cherish his memory, his loving and devoted wife, Evanell; one son, George Jr. (Sharon); one Daughter, Ada (Ron Sr.); eight grandchildren, Jason, Karan, Kevin, George III, Ronnie Jr., Patrice, Therese and Sherfon; fourteen great grandchildren and one on the way; nieces, nephews, other relatives and a host of spiritual brothers and sisters, all of whom loved him dearly and will mourn his loss.

George T. Hunter &#8220;Bo&#8221; was born November 24, 1935, the youngest of eight children, born to Richard and Ada Hunter. As with any child, no one knew the gifts and qualities he would possess or the love he would spread to all he would... View Obituary & Service Information

The family of George T. Hunter Sr. created this Life Tributes page to make it easy to share your memories.

Send flowers to the Hunter family.