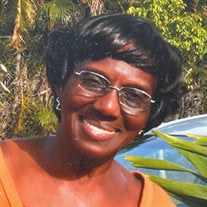 Georgia Ann was born in Sarasota, Florida, September 30. 1937, to Emma Rogers. She was the oldest of three children. She grew up in Miami, Florida, graduating from Northwestern High School in 1956. She married Robert Floyd and from this union five sons were born. Ann relocated to Chicago, Illinois, during the 1960’s. After a brief stint at the main post office, she would soon start working for the government at the Social Security Administration in downtown Chicago. While there, she would go on to receive many awards and commendations. Ann was a kind, loving, and hard-working woman, she loved to cook and take care of her family. Most of all, Ann had the amazing gift of GAB! She also listened very well and knew just the right thing to say. These are just a few qualities that made her a good mother and friend. After a knock on her door, Ann made the decision to put these gifts to the best use by dedicating her life to Jehovah in October 1978. After retiring from her job of 28 years, she finally reached her goal to start serving as a full-time pioneer and graduated in 2008. Ann loved serving her Heavenly Father Jehovah and did so faithfully until the end. On March 15, 2022, Georgia Ann fell asleep in death. She was preceded in death by her mother Emma and one sibling Lucille (Edward) Christian. Many will miss Georgia Ann, but none as much as her sister Willie Mae (John) Morris; her children Eugene Earl Floyd, Jonathan (Charlene) Floyd, George Andrew Floyd, Derrick Floyd, and Lamar Floyd; ten grandchildren Travell, Tiffany, Dionte, Christopher (Renea), Brittany, Brandon, Jarret, Lauren, Janiya and Noi; six great grandchildren and a host of nieces, nephews, cousins, and many friends to cherish her memories.

Georgia Ann was born in Sarasota, Florida, September 30. 1937, to Emma Rogers. She was the oldest of three children. She grew up in Miami, Florida, graduating from Northwestern High School in 1956. She married Robert Floyd and from this union... View Obituary & Service Information

Send flowers to the Floyd family.