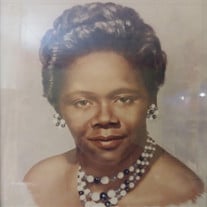 Born in Marion, Alabama on July 29, 1925, Gertha Lee Hardy “Puddin” was the youngest of five siblings (J.C. “Honey”, Rosa Lee “Lady”, J.D. “Coudie”, William “Black”) born to Mary Elizabeth Howze and Willie Wallace. The family later moved to Bessemer, Alabama and then to Cumberland, Kentucky where they lived with her mom and aunts, Lou, Leen and Dauk before migrating to Detroit, Michigan in the early 1940s. Moma was a loving, devoted and caring person, and when her mother became ill, she dropped out of high school and took on the responsibility of homemaker and caring for her siblings. When she arrived in Detroit, she met the love of her life, Horace Hardy Sr. Moma and daddy were joined in matrimony on May 17, 1945 in Toledo, Ohio. To this union were born 11 children: Mary Jacqueline, Brenda Joyce, Gertha Lee, Hiawathia, Horace Jr., Darnise Darcell, Emir Andre, Darrick Jose, Aaron, Gerard George, and Christine Bride. While living in Detroit, mom and dad had their own businesses Chicken’s Picks Last Chance Grocery store and a restaurant. In the restaurant, Moma was owner and chef; preparing and cooking all the food and master baker, baking pies, cakes, etc. The businesses flourished. Moma was able to hire a maid to help care for her children and make sure that they were sent to Catholic school properly. For better opportunities, mom and dad made the decision to sell the businesses and move to Chicago, Illinois in 1956. Dad came to Chicago ahead of his family to pursue a job offer of store management on the south side of Chicago, because the previous owner was retiring. At this time, Moma had seven children and expecting one on the way. We lived on the south side of Chicago in 1956, and continued attending Catholic school. In order to solidify our stay in the Catholic school system, mom and dad were baptized as Catholics in 1956. Later in 1958, the family moved to the west side of Chicago and resided there until mom moved the family to East Chicago Heights in 1970, which included seven family members and herself. Moma was the hardest hustling, working woman in the universe, raising 11 children. She worked 24/7 and not an eight hour job. Moma worked in the Maxwell Street market (also known as Jewtown), CTA barns and other flea markets. In addition, Moma had yard, store, extravaganza, back to school, summer, clothing sales and anything you care to order, Moma could get it! Moma continued to be the bread winner with the help of her sons and daughters to assure the highest education possible. As they begin to take over the business with her help, she instilled and passed on her knowledge, independence and self-sufficiency. After retiring from the open-air-market, Moma continued to serve customers in the community, where she held private, holidays, back to school, and extravaganza sales, etc. She had a loyal customer base that would order specialty items for later pickup and lay-away purchases for special occasions. In addition during that time, she reverted back to her Baptist roots, attending Progressive Baptist Church as an active member until her illness. Moma enjoyed hunting and fishing with her brothers and children, traveling, visiting and cooking large holiday meals and after catching fish, preparing them for her family. Mom in the caring and comforting of her family, made the most scrumptious meals which included pastries such as puddin Nana (banana pudding), egg pies (custard), sweet potato pies, gingerbread, tea cakes, hot yeast rolls, cakes, i.e. coconut, pound and butter cakes, etc., homemade ice cream from the snow and churned ice cream. As a seamstress for her children on her Singer sewing machine, she made dresses, slips and panties, in addition quilting, curtains and pillows, you name it, moma made it all! To all of Moma’s nieces and nephews, she was known as Aunt Puddin, which she cherished. Moma was the last matriarch of the Wallace Klan. She departed this earthly realm on December 27, 2018 to reach a higher ground. Now she has gone the last mile of the way! Moma was preceded in death by her four siblings J.C. “Honey”, Rosa Lee “Lady”, J.D. “Coudie”, and William “Black”; three children Brenda Joyce, Horace Jr., and Gerard George; and special family members from her Detroit roots Jessie and Melrose Clay. Moma leaves to cherish her memories, a nation and tribe, eight children Mary Jacqueline, Gertha Lee, Hiawathia, Darnise Darcell, Emir Andre (Kathryn), Darrick Jose (Debra), Aaron, and Christine Bride Alexander (Mark); and a host of grandchildren, great grandchildren, great-great grandchildren, great-great-great grandchildren, nieces and nephews including the great, great-great, great-great-great, as well as special family members from her Detroit roots Florence Clay-Ricks (Byron), and many friends.

The family of Gertha Lee Hardy created this Life Tributes page to make it easy to share your memories.

Send flowers to the Hardy family.