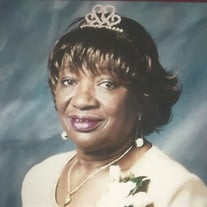 Gladys Marie Scott made her entrance into the world February 19, 1932 in Caseyville, Mississippi. She was the third daughter given to Fannie Mae and Pearlie Scott. At the age of 14, she moved from Caseyville to Natchez to live with her sister Maggie. While living in Natchez, Gladys met the love of her life Charlie Fulton. Gladys was still attending high school when Charlie proposed to her. He asked her to wait until he returned from military service to marry. Charlie returned from military service on September 4, 1952 and the two were married September 10, 1952. Charlie relocated to Chicago, Illinois. Two weeks later Gladys joined him. This is where they begin their life together. Gladys was affectionately known as “Miss Mommy”, because of the love and endearing kindness that radiated from her, especially for children. Gladys loved dancing, cooking, baking, ceramics, macramé, and upholstery. Above all, her greatest love was sharing her hope with everyone she met. She was especially fond of the ministry and teaching others about God’s kingdom. Gladys was introduced to the Truth by her husband. Charlie was introduced to the Truth by his brother Joseph. He immediately recognized the Ring of Truth. Charlie deeply desired his wife to join him in his study of the Bible, however, Gladys was initially very opposed. Although Charlie was already an amazing husband and father, Gladys began to see how the truth was further transforming his life. Gladys decided to research the truth on her own and she too began to appreciate Bible truths. One evening she was so engrossed with her reading of the publication Let God Be True, she did not hear Charlie come home from work. This is when she finally admitted to him that she was ready to begin an in-depth study of the Bible. Gladys began a study with Sister Knight, and she made rapid progress. While pregnant with Bequeta, Gladys dedicated her life, in water baptism, during the summer of 1960. Gladys was a true definition of the word “Pioneer”. With the shortage of brothers in the 1960’s she graciously and humbly accepted an assignment of conducting a Congregation Book Study and handling Kingdom Hall accounts (finances). When qualified brothers became available, she gladly relinquished those duties. She loyalty supported her husband as he served as an Elder and Pioneer at the Englewood Congregation. Gladys was a Regular Auxiliary Pioneer. You would often see Gladys and Sister Hilda Jones canvassing the neighborhood sharing the good news of the kingdom and spreading seeds of truth with everyone they encountered. Gladys and Charlie were known for being hospitable. They housed many Bethel speakers, Circuit Overseers, District Overseers, Delegates, and fellow Christians. Although Gladys battled advanced Alzheimer’s Disease, her deep love for Jehovah was still very evident. She would often be heard singing her favorite Kingdom Songs and mentioning Jehovah by name. Even though she succumbed to this disease we are sure that she appreciated the protection and loving care from her children. Gladys lived the end of her life with her daughter Theresa, who tirelessly took care of her day and night with the support of her siblings. On the morning of January 18, 2021, Miss Mommy peacefully fell asleep in death. It is our hope that she was dreaming of paradise, because in the next instant there is where she will be! Gladys was preceded in death by her loving husband of 57 years, Charlie G. Fulton; her parents Pearlie and Fannie Mae Scott; sisters Magdalene “Maggie” Smith (Robert Lee Smith) and Pearlean Williams; and brother James Scott. She is survived by sisters Fanny Mae “Shugg” Bracy and Margie “Baby” Alston; brothers William “Cent” Elmer Scott and Robert Earl Davenport; children Marilyn Fulton, Evelyn Fulton-Davis (John), Glen Fulton (Jennipher), Bequeta Fulton-Christian (Jonathan), Alma Lenise Fulton, Theresa Ford, Tony Morris (Pearl), Namon Morris (Linda), Lashunda Woodard, Joseph Woodard, Eddie Clemons (Tacarra), Andraya Hall, and Michael Hall and others; grandchildren Jerry Brown (Sheila), Jessica Brown, Xavier Fulton (Ashley), Jeremy Christian (Nicole), Amanda Fulton-Wilson (Cody), Brittany Davis, Zachery Fulton (Ashley), Charlie Fulton, Payton Fulton, Eddie Clemons Jr., E’cariel Clemons, Christopher, Jasmine, Jermaine, Tiara, Christian, Dariel, and Shannon; great grandchildren, great-great grandchildren; also cousins, nieces, nephews, and a host ot relatives and friends. Gladys touched many lives and will be remembered for her devotion to Jehovah and her love for people.

Gladys Marie Scott made her entrance into the world February 19, 1932 in Caseyville, Mississippi. She was the third daughter given to Fannie Mae and Pearlie Scott. At the age of 14, she moved from Caseyville to Natchez to live with her sister... View Obituary & Service Information

Gladys Marie Scott made her entrance into the world February...

Send flowers to the Fulton family.