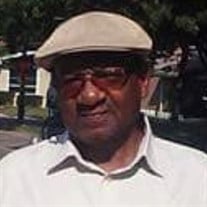 Governor Giles Jr. was born to Govenor and Lucille Giles on August 9, 1949, in Camden, Mississippi. Governor, known as ‘Dit’, accepted Christ at an early age at Cedar Hill CME Church in Camden, Mississippi. After relocating to Illinois, he attended Bloom High School. In the late 1960’s early 1970’s, he began working for Yanson Chevrolet, where he worked as a mechanic. Dit had a love for fast cars along with his brother Claude (Mookie) Giles, he also loved to cook, and he was the grill master for all the family cook outs. Nobody ever had to ask who was cooking, they knew it would be him. He had so much life to live. He was loved by many, always leaving a lasting impression on everyone he came in contact with. Dit was very soft spoken and would do anything for anybody. Dit married Jessie Jackson and had two children from this union Nicky and Lachone with a bonus daughter Keysa. Dit later married Debra Ingram and had 3 children from this union. Latoya, Jamal, and Oba. Dit passed away unexpectantly on Saturday, December 25, 2021, at Ingalls Hospital. He is preceded in death by his parents Governor and Lucilles Giles; two brothers Claude and Richard Giles; and two sisters Dorothy Bingham and Ruby Jean Robinson. Governor leaves to cherish his memories, his five children Nickchele Rogers of Hazel Crest, IL, Lachone Willams (Kornell) of Crete, IL, Latoya Giles-Shaw of Park Forest, IL, Governor Jamal Giles of Dolton, IL, Gerald Oba Giles ( Danielle) of Forest Park, IL; eight grandchildren Nicholaus Rogers, Chontierah Jackson (Craig), Latoya Rogers, Kornell Williams Jr.( Shairese), Kendall Williams (Raven), Dylan, Tyler, and Vylette; seven great grandkids, Laniya, Nishon, Cameron, Karter, Kobe, Kendall Jr., and Kori; five sisters Tincey Giles of Colorado, Mary Jane Butler of Mississippi, Debra Primm of Mississippi, Linda Giles-Hawkins (Rod) of Mississippi, and Ora Anderson of Ohio; three brothers Eugene “Hunny” Giles (Charlene) of Texas, Calvin Giles (Barbara) of Chicago Heights, Michael Giles of Mississippi; and a host of nieces, nephews, cousins, The Luckett’s, The Deeres and a slew of friends that were like family to him. Our dad loved his whole family and we appreciate his buddy his niece Zeda who stayed on him. Thank you for that cousin. May all the memories we all have with him be forever cherished in our hearts.

The family of Mr. Governor Giles Jr. created this Life Tributes page to make it easy to share your memories.

Governor Giles Jr. was born to Govenor and Lucille Giles on August...

Send flowers to the Giles family.